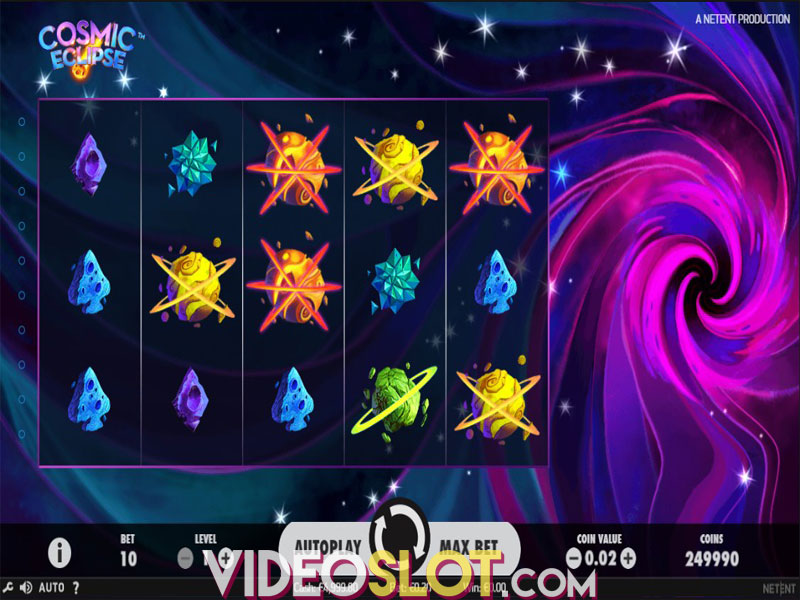 Cosmic Eclipse is a space-themed video slot released by NetEnt. The sci-fi slot machine is filled with planets, rocks, minerals and comets, which can earn you lucrative payouts as long as you match identical items on a paying line. Fasten your seat-belt and get ready for a space adventure full of pleasant surprises.

Planets going around the Sun in our Solar System act as highest paying icons in the Cosmic Eclipse slot. Landing Red, Yellow and Green Planets will earn you the highest payouts, whilst lower paying symbols hide behind rocks and minerals. There are only six paying symbols in the 2017 release and Wild, which can substitute for any other regular icon, is going to help you complete winning combinations. As for the Bonus symbol, it can only land on the reel 5 and it triggers the Black Hole Bonus feature. This special symbol is depicted as the Purple Swirl.

Cosmic Eclipse is a 5-reel slot machine where wins can be achieved across 10 paylines. The minimum bet per line is $0.01, but high-rollers can bet up to $100 per spin. Hitting the Autoplay button will help gamers automate their spins and it is important to note that you can enjoy up to 1,000 automatic spins with this feature. As usual, regular winning combinations pay out from left to right.

Many people are scared of Black Holes, but you should not be afraid of this region of spacetime as you can trigger a nice cash-out with the Black Hole Bonus feature. As previously mentioned, the Bonus symbol activates the feature. During the bonus game, one symbol is randomly picked and turned into an "active" symbol. The Bonus symbol then turns active and gets sucked in by the Black Hole along with Wilds and other active icons. The slot then triggers its free re-spins where players can collect up to 15 symbols. The game then randomly places each and every of the collected symbols on the reels, awarding at least one winning combination.

Cosmic Eclipse can be played on both mobile devices and tablets. The NetEnt product offers an average RTP of 96.52%, but if you like simple slots, this game is definitely worth your attention. Seeing that the Black Hole feature is triggered fairly easy, we strongly recommend you to try your luck with the NetEnt 2017 title.