You are at: Home NetEnt BerryBurst
back to all games
BerryBurst Slots Game
Game Details 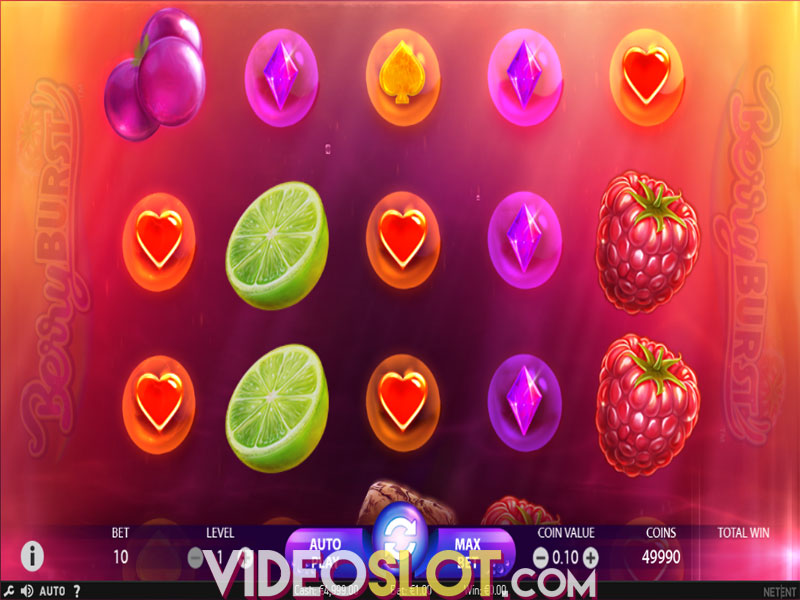 BerryBurst is one of two video slots under this title launched in August 2018 by NetEnt. Namely, NetEnt, being one of the leaders in the gaming market, decided to go one step further and create two versions of one game, a standard one and its Max version which offers much higher payouts. BerryBurst is the standard version with medium variance and provides outstanding visuals and a cheerful, relaxing soundtrack. On top of it, the game boasts Cluster Pays and Expanding Wilds with a win potential of 3,000x the stake and an RTP of 96.56%.

The game is played on a 5x3 reel set with symbols seemingly floating in a refreshing fizzy drink. There are no paylines to wager on, as the symbols provide prizes when appearing in clusters of at least 5 matching icons connected horizontally or vertically. Your total bet, which can go up to 100 coins, will depend on the bet level you choose on a scale from 1 to 10. Select a coin denomination ranging from $0.01 to $2 and start the game by pressing the Spin button. If you want to take it easy and relax without manually spinning the reels, activate Autoplay which will play the game automatically for a set number of times. Another option at your disposal is Max Bet, which can be used if you want to play the game with the highest bet level available.

There are 7 regular symbols that should land in clusters in order to deliver payouts. High-value icons are depicted with deliciously sweet fruits such as raspberries, tangerines, grapes and limes. If raspberries land in a cluster of 15, they will award 5,000 coins. Creating a cluster of 15 tangerines rewards 3,000 coins, while grapes and limes offer up to 2,500 coins for 15 matching symbols. Low-paying symbols are represented by playing card suits - hearts, spades and diamonds – that can increase your balance by up to 1,000 coins if they cover the entire grid.

Each time Wild lands on the reels, it will expand to cover the reel entirely and award a respin. Wild replaces all other symbols in forming winning combinations both in the main game and during respins. However, when 6 or more Wilds form a cluster, they only replace symbols on either side of the cluster. The only time Wilds can form their own win combo and deliver a payout is when they appear on all reels and expand to cover the entire screen in which case you hit a prize of 5,000 coins. If more Wilds appear during the respin, they will also expand and retrigger the feature. Respins continue as long as Wilds appear or until 5 Wilds land on the reels.

Even though there are no bonus symbols or free spins, to spice it all up a little, BerryBurst doesn’t lack excitement. You will look forward to any Wilds appearing, as they will boost your wins and offer additional chances of winning during respins. Payouts aren’t sky-high but they do land quite often and can provide you with up to 50,000 coins, which is not to be neglected. As the game is available on most devices, you can play it anytime, anywhere, without the need to download it.