You are at: Home Microgaming Poke the Guy
back to all games
Poke the Guy Slots Game
Game Details 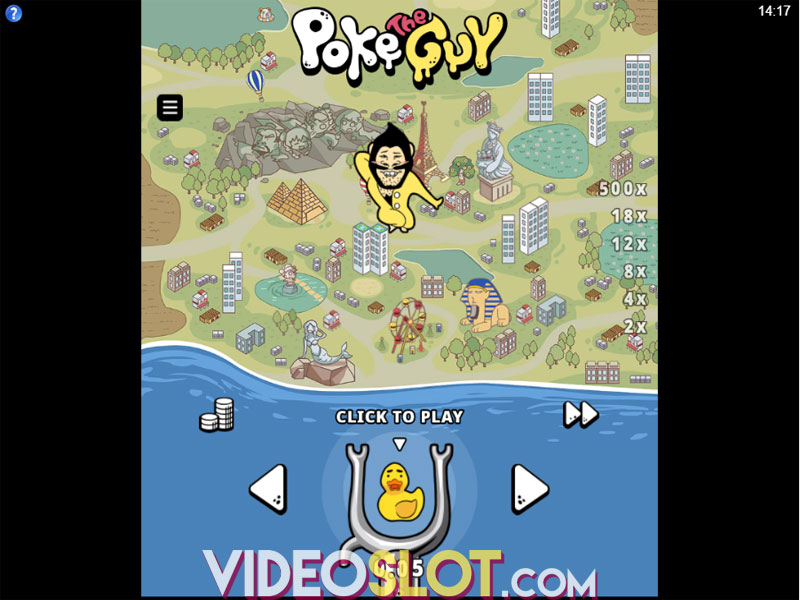 About Poke the Guy Slot
Rating:

If you want to try something completely different from what you already played, then Poke the Guy, a unique slot from Microgaming, may be right up your street. However, we must warn you that this is in no way a standard video slot. The game looks more like an arcade game, with no reels or paylines. The gameplay is as simple as you can get, the only requirement being to take down the fellow using a variety of objects, such as knives, lethal piranha, rubber ducks and ice-cream. The highest potential payout per shoot is 500x your bet.

The authentic slot doesn't include any reels, rows or paylines. To be precise, Poke the Guy is devoid of everything that could make it a typical slot machine. The only aim here is to catapult a different object from an electrified fork and take down the eccentric-looking guy in yellow kimono. Interestingly, the stake will be determined by the object you chose, however, you can also raise the stake using the Total Bet feature. To start playing, you can bet anywhere between $0.01 and $30 per shot. If you prefer fast-paced gameplay and wish to speed up the shooting a little bit, you can click on the Fast Forward button.

The Guy is the only symbol you will find in this game and he will jump between popular tourist attractions on the map, while you poke him with a wide selection of weapons. Some of these landmarks include the Eiffel Tower, the London Eye, Mount Rushmore, Egyptian Pyramids, and the Sphinx.

Much to our disappointment, the Microgaming title excludes all bonus features, making the gameplay a rather dull affair, with only one objective – to press the electrified fork in hopes of shooting 'the all around jumping fellow'. What's more, the object you selected will shoot randomly, so players will not have any control over the outcome, which can be really annoying. The rewards seem to be completely random, too, so don't expect to see any logic or connection between the payout and the space occupied by the yellow giant.

Poke the Guy offers some fixed rewards using the total bet per shoot and a random multiplier. The available multipliers are as follows: 2x, 4x, 8x, 12x, 18x and the maximum of 500x. So, when playing with the highest stake allowed, the prizes can reach a whopping $15,000.

We must admit that it took us a while to fully digest this weird slot that looks more like an arcade game than a regular slot machine. It is hard to tell what Microgaming aimed to achieve with this release. In our opinion, they did make a bad call when creating Poke the Guy, since, let's be honest, most of the time you will be losing money, and, even when you are on a lucky streak, you'll never learn how you can rack up some bigger prize. Nonetheless, you can definitely give it a try, just to check out yourself if we were right or wrong.