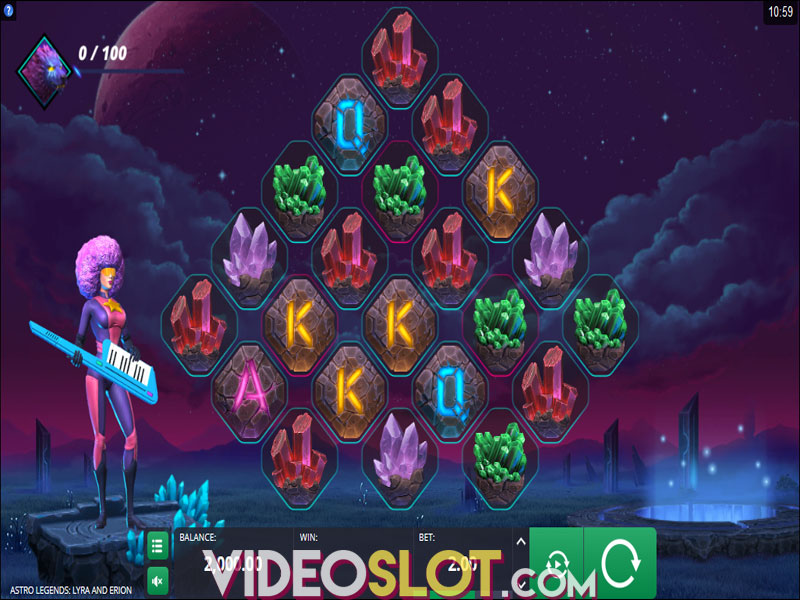 Microgaming is well-known for their cooperation with other developers and this time around it’s a young company called Foxium. The two companies decided to create and launch a space-themed video slot titled Astro Legends: Lyra and Erion. Design-wise the game looks superb, it boasts galactic graphics, high-definition animations and a sonic soundtrack. This slot tells the story of an intergalactic fight where players have many opportunities to win big.

An unusual diamond-shaped grid offers cluster pays with symbols awarding prizes when at least 5 appear on adjacent reels anywhere on the layout. Make sure you set the value of your wager which can be as little as $0.10 and up to $10 per spin. Press Spin to start the game or activate Autoplay for up to 100 automatic spins.

Low-value icons are depicted as Queen, King and Ace playing card symbols that pay from merely 0.2x, 0.4x and 0.6x the bet when 5 of a kind appear on the reels up to 100x, 200x and 300x your wager respectively if 22 matching symbols hit the grid. On the other hand, precious gems, Peridot, Amethyst and Garnet, represent high-paying symbols that award 0.8x, 1x and 2x the bet respectively for 5 of a kind. Should you be lucky enough to fill the entire grid with one of them, Peridot will deliver 400x, Amethyst 500x and Garnet 1,000x the bet.

Look out for Multiplier Wild which appears on three red positions in the center. Not only that it replaces all other icons but can increase your wins up to 5x while doing so. Landing multiple Wilds boosts the Multiplier values significantly and could help you land the game’s top payout of 150,000 coins. In addition, any win can trigger the Sonic Respin feature in which winning symbols remain on the reels and the rest of the grid is cleared so that new ones can appear. If there is a new winning combo the feature will continue for as long as this occurs or the entire layout is filled with identical icons. Furthermore, you can benefit from collecting Starburst Bubbles that appear on symbols and award from 2 to 10 points. Gathering 100 points will transform Lyra into a Wolf spirit and trigger the Pick Me Bonus feature where you are supposed to evade Erion’s crystal obstacles by choosing paths. Should you finish all 7 levels with at least 1 out of 3 lives saved, you will be rewarded with a 20x multiplier.

Venture to help Lyra fight Erion and take advantage from lucrative Multiplier Wilds and entertaining features that award hefty prizes. Find this slot and give it a go for it can be played any time you want on mobile, tablet or desktop.