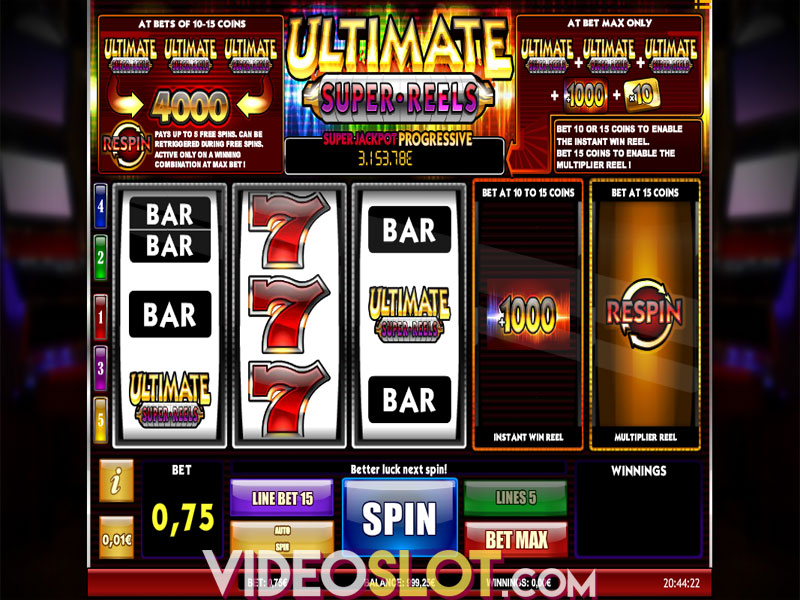 If you are looking for a more traditional video slot, reminiscent of an old-school fruit machine, but with a modern twist to it, then Ultimate Super Reels will be right up your alley. Powered by iSoftBet, the classic slot is unique in many ways, though it features 3 reels and 3 rows. However, on closer inspection, players will notice that there is also an instant win reel included, as well as a multiplier reel, provided the bet per line is not less than 10 coins or 15 coins, respectively. What makes the enticing title stand out from other classic slot machines is the addition of a progressive jackpot and multipliers that can significantly enhance your bankroll and keep you engaged throughout the game.

As the title itself suggests, the game revolves around the reels' ultimate power for creating highly lucrative cash prizes. The entire design of the innovative title is envisioned to simulate the physical casino experience, which is further highlighted with the noise coming from the background, as well as the bold look of the playing interface. The symbols you will come across include Ultimate Super Reels logo symbols, traditional lucky 7s, and two and three BAR stripes, all dazzling and brightly colored, that may seem over the top to some players.

The slot can actually be split into three different games, each of them awarding prizes on its own. Basically, you are given the power to decide how many reels you would like to activate at any moment. The first three reels will always be at your disposal, however, once you increase the bet per line to 10, the fourth reel will come into play. Likewise, the fifth reel will be unlocked when you play at a maximum bet of 15 coins. Keep in mind that activating the fifth reel will also unlock multipliers and provide you with an opportunity to grab a progressive jackpot.

Being a very simple offering, the game doesn't feature any Wilds, Scatter symbols, but, do not let that dishearten you, since the iSoftBet release boasts a number of other rewarding features, including multipliers and re-spins that do bring an amazing potential for sizeable wins.

The big draw is, no doubt, the progressive jackpot, which you can hit by landing three Ultimate Super Reels logo symbols on an active line, paired with an instant win of 1,000 coins and a 10x multiplier, which are all featured on the fifth reel. However, it is important to note that, to qualify for one, you will be required to select the maximum possible bet. Finally, the highest amount you can win, without the two additional reels included, stands at 4,000 coins.

By activating the fourth reel, you can scoop some extra coins. The symbols that pop up on this reel will literally display how many coins you win and the rewards will range between 50 and 1,000 coins. Land any of the symbols on an active payline, and receive the amount shown - as simple as that!

The fifth reel, on the other hand, will present you with two different kinds of prizes, the first of them being the re-spin symbol, providing you with up to five free spins. The good news is the feature can be re-triggered should additional re-spin icons land during this round, and there is no limitation to the number of free games you can receive in such a way. Multipliers are another big attraction of the fifth reel, granting anywhere between 2x and 10x for your wins. The only shortcoming of this feature are the paylines, since, on the fourth and fifth reel, all five paylines transform into one.

Ultimate Super Reels slot machine is an interesting addition to the iSoftBet portfolio, providing players with a great opportunity to grab some massive wins, while also enjoying the thrilling 'cash hunt', especially when the two bonus reels come into play. The progressive jackpot is, without a doubt, just the icing on the cake. Whether you are a fan of classic slots or not, the game is sure to capture your attention, and, hopefully, provide you with a hefty loot.