You are at: Home iSoftBet Forest Mania
back to all games
Forest Mania Slots Game
Game Details 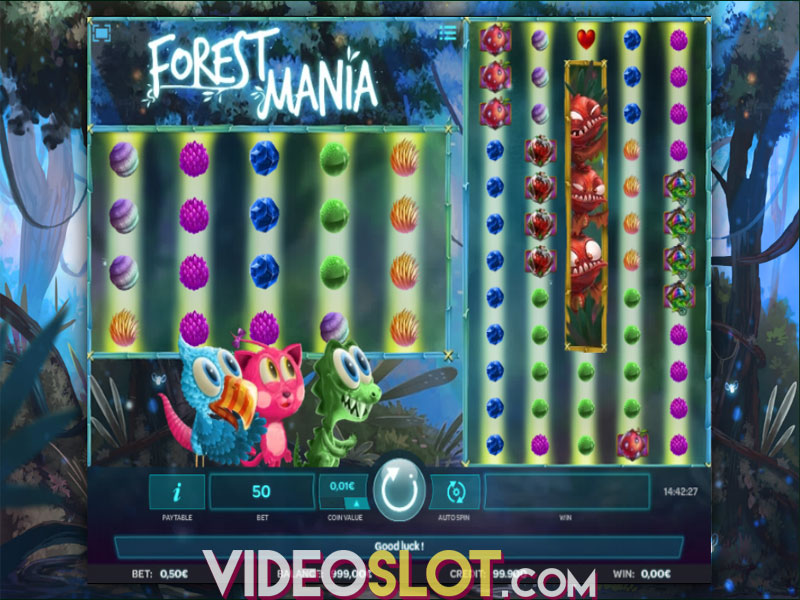 You might be familiar with the concept of Colossal Reels, a feature introduced by WMS? Well, if this is true, you will easily understand the latest iSoftBet slot Forest Mania. The slot's visuals are exquisite with 3D symbols and three cute characters observing the gameplay. You will be taken into the dark of the woods where you will create multiple winning combinations due to the rewarding features the game offers. The minimum wager you have to make in order to start spinning the reels is $0.50 as the bet is configured to 50 coins. High-rollers won't be disappointed either as they can wager up to $50 per spin.

The players who haven't heard of Colossal Reels might be surprised by the slot appearance as it features two reel sets. The main set features 5x4 reels while the other set features 5x12 reels. The reels are transparent and populated with strange creatures, hearts, gems and more you need to land on one of 100 paying lines to hit a win. All combinations consisting of three or more matching symbols will pay a prize.

When it comes to special features, you can benefit from Wilds. Actually, from a lot of Wilds. Wild represented as a golden coin with the letter W on it will replace all other symbols to help you win more. These symbols will be added to the reels by choosing one of the symbols on the main reel set and turning it into Wild. All the symbols of a kind on both set reels will be turned into Wilds which can complete multiple winning combinations at once.

What's more, up to three reels on the main grid can go Wild and the corresponding reels on the right side of the screen will follow. Despite the fact that the Forest Mania slot does not feature Scatter, up to 10 Free Spins can be awarded during which Wild symbols and reels will appear more frequently.

What you should know about Forest Mania is that the main set of the reels uses 20 paylines while the rest of the paying lines can be created on the Colossal Reels. The game may seem a bit complicated and perplexing, but the truth is that it functions just like all other slots you have played before. Thanks to its structure and numerous Wilds covering the reels entirely, you can win big. Triggering the bonus features including free spins will depend solely on your luck, but once you trigger them big payouts are guaranteed despite the fact that jackpot stands at only 250 coins.