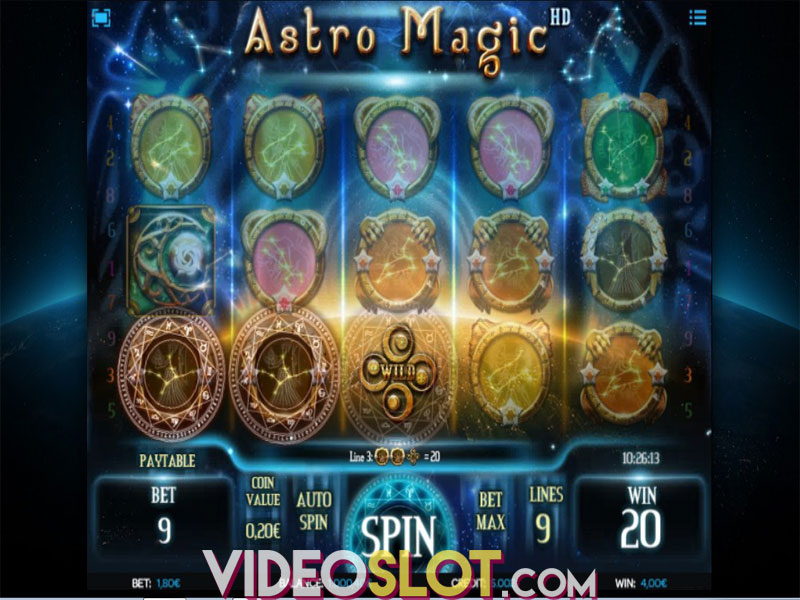 Do you believe that your destiny can be determined by the celestial bodies in the sky? Astro Magic HD, powered by the iSoftBet software provider, tempts you to embark on an unforgettable journey to the stars and find out what the future has in store for you. Whether you are an astrology enthusiast or not, the 5-reel, 9-payline slot machine will provide all with an opportunity to pave their way to enormous riches, thanks to some incredible features, including Wild symbols and Scatters, as well as the Instant Bonus round awarding free spins and multipliers and the Galaxy Bonus round that can grant up to 4,950 additional coins on every single spin.

In terms of visuals, you are guaranteed to be delighted, since Astro Magic HD is certainly one of the best titles produced by the same gaming supplier. The reels themselves are translucent, with a starry night sky serving as the backdrop, which adds to the overall spiritual and otherworldly air of the game. The SF-inspired soundtrack complements the theme, contributing to a great deal of suspense.

Before you set out on a star gazing trip, you will need to adjust your stake first. It can be anywhere between $0.01 and $45 per spin. By clicking on the Coin Value button, you can choose from several different coin values varying between $0.01 and $2.00. Lines feature, on the other hand, will select the number of active paylines, while Bet Max will set the highest possible wager. Finally, Autoplay feature is also at your disposal, and it will allow for up to 1,000 automatic spins, whereas the Spin button will set the reels in motion.

Golden Hexagon Scatter is definitely the most generous symbol on the reels, awarding the astonishing 1,800 coins for landing five of them anywhere in view. The second in line is Wild, represented by four orbs in the shape of a diamond and it can substitute for all other symbols except for Scatters and two Bonus icons. In addition, Wilds can grant up to 1,000 coins for landing five of them on an active payline. The rest of the symbols include the twelve constellations of a zodiac, which can provide you with anywhere between 100 and 1,000 coins for matching five of them on a single line.

Land three, four or five Instant Bonus symbols anywhere in view and trigger the Instant Bonus round, where you can win free spins and multipliers. The Galaxy Bonus round is another big draw of the game, and it is launched once you land three or more Galaxy Bonus symbols anywhere on the reels. Here you can hope to boost your wins with up to 4,950 extra coins.

Regardless whether you are an astrology believer or not, Astro Magic HD is sure to delight you with its fast-paced gameplay, captivating graphics, as well as highly rewarding bonus features and special symbols that can change your destiny for the better. The game has a medium volatility with an average return to player (RTP) of 96.54%. Give it a spin today and find out if you are really born under a lucky star.