You are at: Home IGT Golden Egypt
back to all games
Golden Egypt Slots Game
Game Details 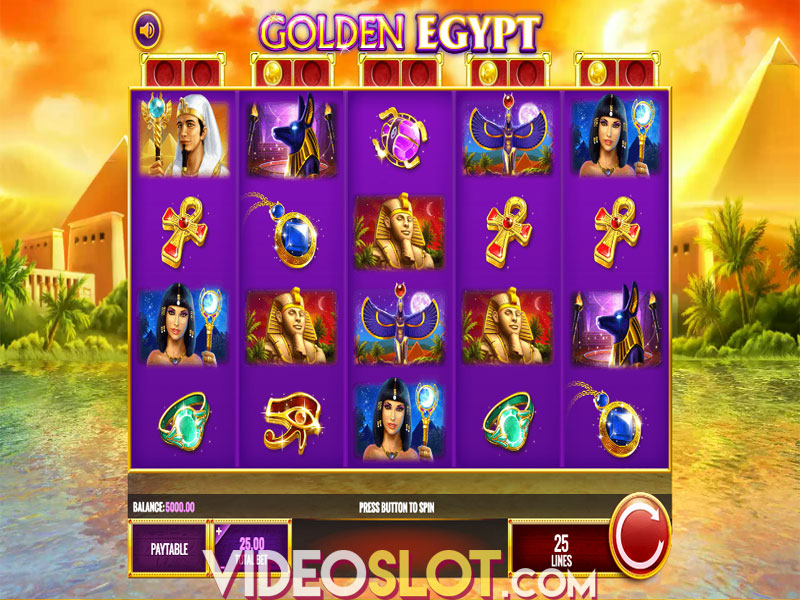 IGT leads us to Ancient Egypt where pharaohs enjoy their afterlife deep inside pyramids. The pharaoh is the main character of the Golden Egypt Slot set in exotic landscape of North Africa where the River Nile flows alongside beautiful palm trees. Slot lovers will surely love its stunning graphics, while lucrative bonus rounds could be a boost for their bank account. Golden sun rays appear in the backdrop of the main window as well, which explains why the video slot was named Golden Egypt.

The slot uses a 5x4 layout, with 25 fixed paylines. Seeing that gamers can bet from $0.25 to $500 per spin, both amateur players and high-rollers should find the IGT release attractive. As usual, hitting the Autoplay button is going to help you spin the reels automatically.

Coloured gems, the Eye of Ra and Golden Ankh act as low paying icons in this slot machine, while the depictions of Cleopatra, the Pharaoh, Anubis, Phoenix, Sphinx and ship sailing down the river Nile award high-value prizes. The Pharaoh’s Mask is the highest paying symbol of the Golden Egypt slot, with five of these paying out no less than 300 coins.

Regular Wild symbols do not land on the spinning reels in the IGT slot, but hitting Golden Coins could earn you lucrative cash prizes. Whenever Golden Coin lands on the reels, it will be added to a meter placed above that particular reel. As soon as players collect two special coins, the whole reel will turn Wild for the following two spins. If more than one reel turn Wild, you will enjoy a massive payout.

The Pyramid acts as Scatter, with three four or five of these earning you free spins. It is important to note that slot enthusiasts will enjoy 90 free spins if they land five Scatters. This bonus feature can be retriggered.

Despite the fact that Golden Egypt offers a 94.2% RTP, which is anything but impressive, the IGT title is definitely worth a try as it has amazing graphics and interesting bonus features. Turn back the clock and prepare for a virtual trip to the golden dessert of Egypt, which is likely to help you revive the story of the ancient civilization. The Golden Egypt slot is totally mobile-optimized, meaning that you can enjoy the game lying in your bed or driving in a bus or train.