You are at: Home GiG Games Popstar
back to all games
Popstar Slots Game
Game Details 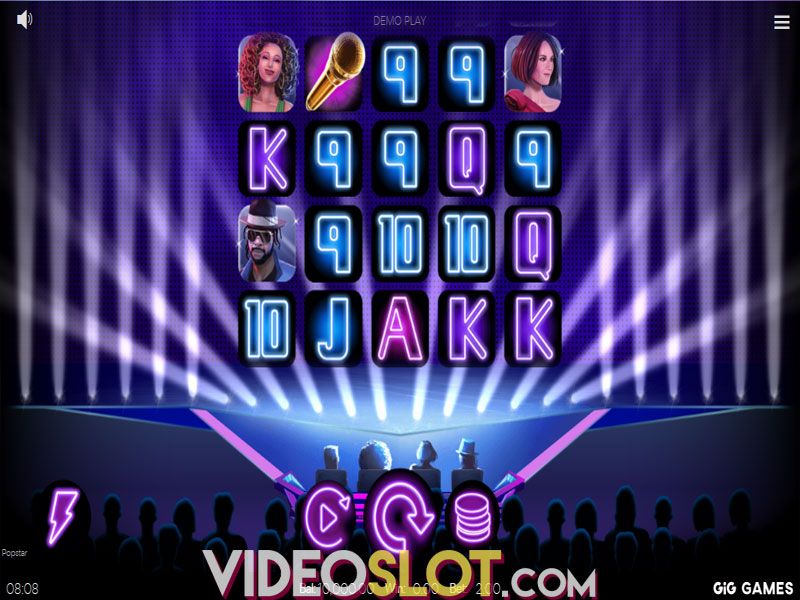 We don’t usually watch talent shows on TV, so we usually miss any rising stars until they’ve made it big. Most of them will go on to have great careers or fade from the public’s mind with time. But few opt to have a video slot created with their likeness as a star. Hence our surprise to find Erik Segerstedt, runner-up of Sweden’s 2006 Idol, on the centre stage of the GiG Games release!

The animations are good, the presentation is top notch, and including Erik’s more popular songs was a nice touch. However, Popstar stumbles when it comes to screen transitions and looping animations. They work well... mostly. However, you can tell certain animations were never meant to loop the way they do during special features. With a few minor adjustments, it would look a whole lot better.

Speaking of bonuses, there are a few to keep you busy! There is one, comprised of two stages. The first step, activate free spins! The second step, collect golden tickets to substitute certain icons and increase your chances of victory. And if you plan to hit the 500x jackpot, you’ll have to impress the judges to slip you a few tickets!

Popstar is a 5-reel, 4-row game with 1,024 ways to win instead of traditional paylines. As far as betting goes, this GIG Games release pretends it has 20 fixed paylines. It allows you to set your wager between $0.20 up to $10 per spin. Tap the neon-pink spin button to move the reels and get one step closer to the finals. But if constantly clicking one button is a pain, you can always use Autoplay.

Speaking of neon, this slot loves it. So much that all of the playing card royals are done in the same style. We aren’t big fans of filler symbols, but we have to begrudgingly admit they do look cool here. The higher paying icons are Erik and the four judges.

If you want to make the most out of Popstar, you will have to make use of its incredibly lucrative free spins! To do so, you will have to collect three, four or five Scatters. These can reward anywhere between 6 to 14 free spins, depending on how many you have and how lucky you get. Once the bonus is already active, two or more Scatters add additional free spins to the counter.

When the special feature is activated, the four judges will each appear with a six-stage tracker in each corner of the screen. To fill the meter, you have to collect golden tickets that have a chance of appearing next to the appropriate judge. Collecting six golden tickets transforms that judge into the Erik symbol, and rewards you with two more free spins.

The game has medium to high volatility and an RTP of 96.70%. The special features were interesting and the gameplay was very enjoyable. Popstar only has to fix a few small details, and it will be a smash hit, we have no doubts. Keep up the current pace, GIG Games – after two mediocre games, you’ve finally gotten back up on your feet.