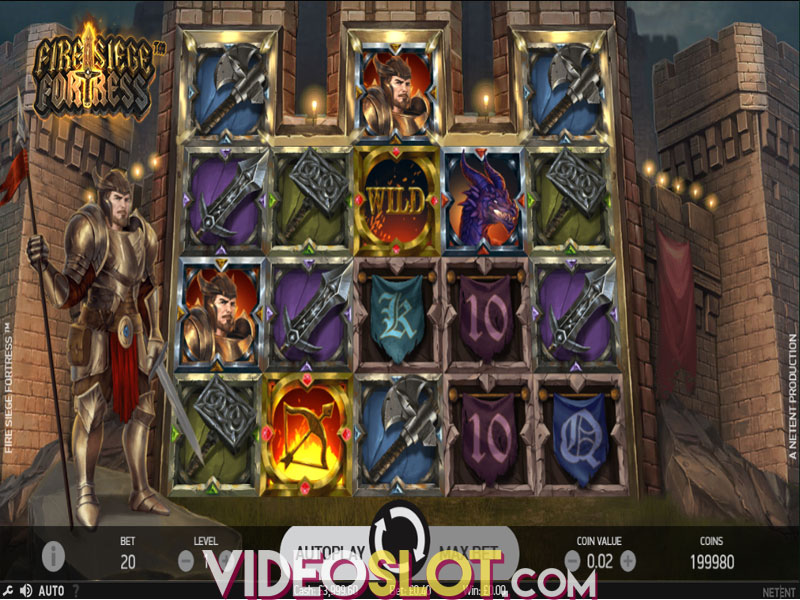 When we first heard the title Fire Siege Fortress, we thought NetEnt decided to forgo video slots entirely and start their own Clash of Clans rip-off to make even more money hand over fist. But no, the generic name actually wasn’t indicative of a game made for mobile phones – instead, it’s the title of the NetEnt latest release that has fire, sieges and fortresses in it. It’s set in a fantasy world, where dragons are a real thing. But it also tries some interesting things with its reel setup being in the shape of a fortress and its special features benefitting from exploiting positioning on the reels. All the while, a knight sits by the sidelines to cheer you on – while you tackle this 5 reel playing field with 576 ways to win. The game has a medium to high volatility, with a jackpot worth 3,456x the wager, and several special features to spice up the gameplay.

Visually speaking, it’s as grand and eye-catching like all other NetEnt games. You have this awesome, giant fortress looming over you, with the reels overlaid at the very front, where you’d expect the gates to be. You see the flickering of torches and the banner on the right slowly moving with the wind, while the knight left of the reels idly moves about, and smacking his spear and putting on his angry face when you spin – and cheering you on when you win something on the reels. The symbols include playing card icons 10, J, Q, K and A, as well as a war-hammer, a large axe, a sword, the knight from before, and the dragon. Each symbol has a small animation tied down to it when it’s part of a winning combination. In terms of gameplay, Fire Siege Fortress is focused on its special features, thanks to the medium to high volatility. And there are a lot of bonuses to talk about, so strap yourself in!

Let’s start with something basic and easy. Collect three Scatters on the first, third and fifth reel at the same time, and win free spins. Rather simple, but that’s where the twist comes in. The game awards 3 free spins when the symbols land anywhere on the reels. Yet, if they land at the very top of the reels, then they bring 6 free spins instead, making the maximum you can win 18 extra turns. If you manage to only score two Scatters, you can either win 3 free spins or a 5x bet cash win. Wilds can also bring three different bonuses depending on their location. Wild at the bottom position of the reel 2 will create one to three random Wilds on the playing field, Wild at the bottom position of the reel 3 will expand Wild to cover the entire third reel and Wild at the bottom position of the fourth reel will create one or two Giant Wilds on the playing field.

So, despite the rather generic name, we ended up loving this NetEnt release. It has a good jackpot, the gameplay is varied thanks to reel positioning being a thing and the gameplay outside of that has a nice balance of grind and big wins. We can easily recommend for you to play Fire Siege Fortress, if you enjoy titles that lean towards the high volatility of the spectrum, but aren’t quite as punishing as the real thing. After all, its RTP sits at 96.30%.