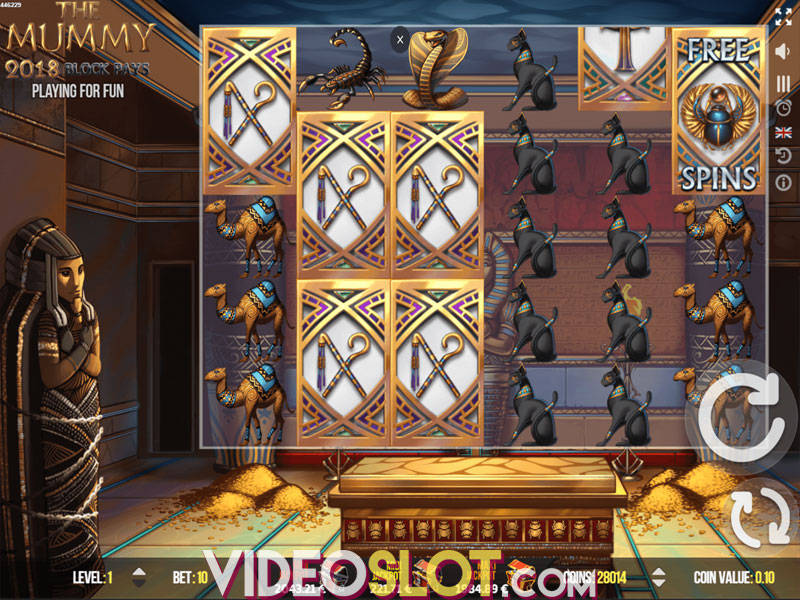 When breaching a tomb of a long lost pharaoh, you need to be careful, dear readers. You may find yourself exposed to a poisonous gas made to keep out intruders or fall into a trap meant to protect the pharaoh’s treasures. Worst of all, you may incur the wrath of the heavens, which will send the shambling undead to exact their vengeance upon you! This Fugaso release explores that third option, with the sarcophagus shaking, barely keeping the mummy restrained. Gorgeous graphics, fluid animations and lucrative special features await all those who enter – and for the lucky few who survive, a 1,000x jackpot waits once you escape.

The Mummy 2018 is a 6-reel, 5-row slot with Block Pays instead of regular paylines. Wins are granted when nine or more identical symbols form a block. The icons have to be adjacent to each other either horizontally or vertically. Players can set their wagers between $0.10 up to $100 per spin. Pressing the Spin button will make the reels move, revealing new icons and possible winning combinations. The Autoplay button brings up a menu, letting you set the number of spins, a winning or loss threshold, and a single win limit.

This has to be one of the better looking Egyptian games we have reviewed. You have a hard working camel, a dangerous scorpion, a fierce cobra, a regal cat, as well as several symbols relevant to Egyptian mythology and worship – the crook and flail used by the pharaoh, the ankh, the Eye of Horus and a richly decorated scarab, all four imprinted into cards.

When players finally land a win, there is a chance the re-spin special feature will activate. All winning icons are held in place, while all other positions are re-spun. If the winning block expands after a re-spin, another one is granted. If not, the existing pay is awarded, and the re-spins end.

There is a progressive jackpot, which is triggered randomly and rewards one of the three jackpots you see in the bottom status bar.

The Mummy 2018 is a medium-high volatility title with an RTP of 96.42%, which is average for that developer. With fantastic special features and some of the best visuals we have seen, the Fugaso release showed a strong hand, and then topped it off with progressive jackpots. The maximum non-progressive jackpot win is worth 1,000x your total bet.