You are at: Home Eyecon Shamans Dream
back to all games
Shamans Dream Slots Game
Game Details 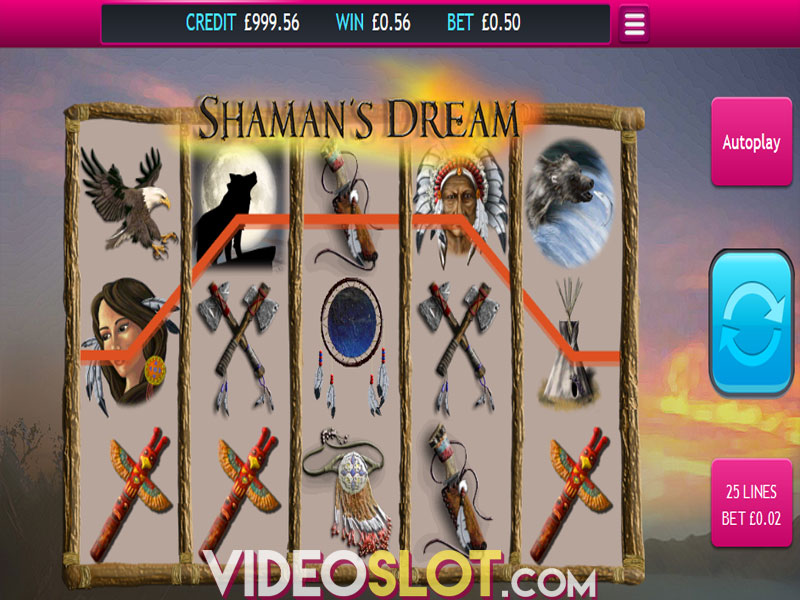 Shaman is someone who practices reaching altered states of consciousness. The goal is to perceive and interact with what they believe to be a spirit world. Various civilisations have manifested different types of shamanism, but Shaman’s Dream slot by Eyecon focuses on the Native American side of the coin. Even though Native American cultures have never used the term “shaman” or anything of the sort, they’ve also had traditional healers and ritualists whose role is equivalent to the one of a shaman, or at least to the concept of a shaman as we see it today.

The slot game is gorgeous – it has a lovely design and its set against a backdrop of a sunset somewhere in the prairie. The colour tones are mostly brown, orange and brick red and the reels are framed by some twigs and feathers. There are 5 columns and 3 rows, so it’s a typical setup for a video slot. The game offers 25 paying lines, delivering prizes left to right.

The paytable contains 12 symbols, all related to the theme. From the one with the lowest value to the one that pays the most, the features symbols are: totem, necklace, axes, bear catching fish in a creek, knife pouch, wigwam, buffalo, eagle, Native American woman, chieftain, Native American man and wolf. The wolf is the Wild card, substituting all other symbols except for the Scatter represented by a dreamcatcher amulet. The users are allowed to set the stake per line and the number of active lines. The Autoplay feature is optional and gives one the choice of 10, 20, 50 or 100 automatic rotations.

The main bonus is the Free Games feature. For it to get cracking, one needs to collect 3 or more Scatter symbols on any positions on the reels in a single spin. The reward for this accomplishment is 15 freebies with all wins tripled. As is customary, free spins are played using the same number of paylines and the same size of wager as on the triggering spin. Another combo of Scatters and the feature can be retriggered, up to a maximum of 15 times. On occasions, the operator will enable a Gamble feature as well, and the players can then gamble their winnings away or double them if they are lucky.

Shaman’s Dream slot is one of the more recognisable Eyecon titles, and it’s one of the best in the Native American genre. For some, the game might be lacking some extras, but for others the slot is perfect as it is. The settings are quite flexible and the range of available bets should be enough to satisfy both casual punters and bigger gamblers. Up to 240 free spins can be won and who knows – perhaps you’ll get in touch with your spirits by the end of the session!