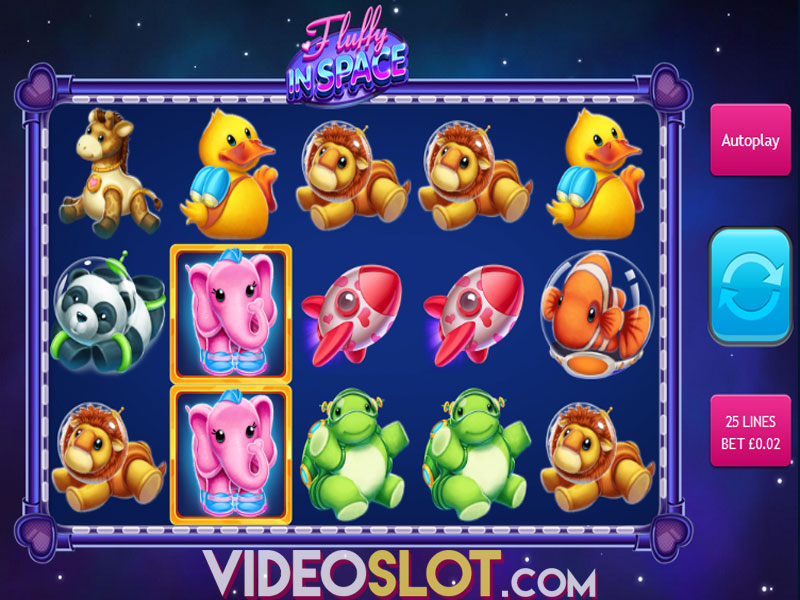 About Fluffy In Space Slot
Rating:

Fluffy Favourites protagonists became everyone’s favourite animals. The puffy panda, the playful pink dragon, the lovely hippo, the cheeky gorilla and other stuffed pals make another appearance in Fluffy in Space, Eyecon’s spin-off of their flagship slot. Just like in the first instalment in the series, the focus is on toy animals, only this time their design and style is slightly updated. You will see the adorable animals wearing cute outfits, in fact space suits. They are being launched into the cosmos to spread the cuteness and bring down handsome wins for you.

The backdrop for the game is outer space - a dark blue wallpaper with stars twinkling in the distance. Don’t expect any details surrounding the reels and we say that in a positive way as the minimalistic setting makes the symbols really pop out. The team of astronauts consists of a clownfish, a duck, a rhino, a giraffe, a turtle, a panda, a gorilla, a dragon and a hippo. The crew is aboard a spaceship which is the highest paying icon in the paytable. There is a Wild which is the substitute symbol for all the regular icons except for the symbols of Nellie the elephant and the satellite which are the Bonus and the Scatter.

What good can they bring? Well, the Wild, as always can increase the winning potential by completing winning combinations. It appears on all reels except for the first one. The elephant Bonus symbol triggers the Fluffy in Space feature when it lands on the middle reels. Nellie icons stay in plays while 3 spins are awarded and all other positions become individual reels. More Nellie symbols can appear in stacks and add more freebies. The feature ends when no additional free spins are available or if 15 Nellie symbols are stuck on the screen.

The satellite Scatter activates the regular free spins special feature during which 6 gratis spins are played. Side note – the round can be retriggered up to 50 times. As far as the base game goes, Fluffy in Space slot game has 5 reels, 3 rows and 25 active paylines. It’s a pretty standard ordeal, where winnings are paid from left to right. The players have the option of activating automatic spins when they want to experience quick gameplay. Autoplay kick-starts 0, 20, 50 and 100 consecutive spins with no pause in-between.

All things considered, Fluffy in Space carries the torch well for the Fluffy series. The RTP for this product is 96.3% and the slot works great on all devices. Within its franchise, it is a great addition, but it’s worth mentioning that only selected Eyecon-powered online casinos offer the game. There are talks about Fluffy in Space and Fluffy favourites being somewhat inappropriate, as they may appeal to underage Internet users. That being said, only adult players can join any online casino and play for real money, so there are no obstacles for those who have Fluffy in Space on their list.