You are at: Home ELK Birthday
back to all games
Birthday Slots Game
Game Details 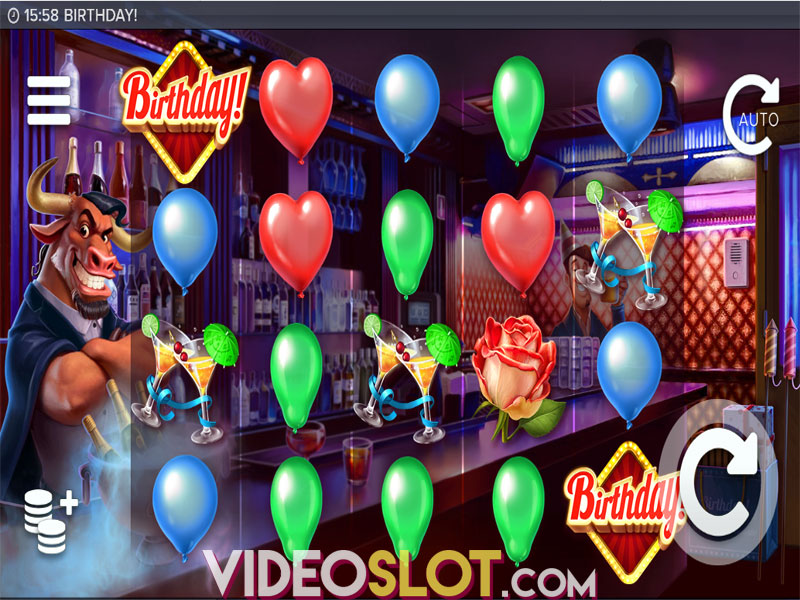 As the game itself says – it’s always someone’s birthday somewhere. Maybe right now, it’s yours, too. Maybe it won’t be for the next few months or maybe it was just last week and we missed it. Regardless if you’re the lucky birthday boy or girl, you’re invited to this fancy birthday party with all the recognizable ELK Studios characters bringing their gifts in the form of various special features. So grab your favourite drink, lean back in your chair, and get yourself in a celebratory mood. The game is a medium to high volatility offering, with a jackpot worth 5,000x the wager. Players will be treated to a whole host of re-spins, free spins and different Wild bonuses.

While it’s nothing breathtaking visually, we quite love the theme. ELK Studios always has a small introduction reel at the start of all their games, doing their best to set up characters to make them memorable, even if all you can remember them is just being from your favourite slot. And this isn’t the first time they’ve done something like this either – the developers also made a Christmas themed game in which all of their popular characters made a prominent showing. It makes their titles stand out from a generally stereotypical slew of holiday-themed titles and we think that ELK Studios may have struck gold with this idea.

We’re certain gamblers enjoy fan-favorite characters popping up in new releases, too. There’s not much in terms of symbols to talk about. Three different colors of balloons, drinks, a red rose, and the game’s logo are everything you can find on the playing field. As far as gameplay goes, it’s all about the literal mountain of special features it offers.

Considering most of them cover the same area, it can take a while to go through all of them, and we feel like maybe giving you a choice of which bonus you wanted to activate after seeing them all could have been a nice touch.

The first special feature is the Happy Spins feature or five respins which are triggered at random. You’ll know they activated when you hear the doorbell, which introduces one of five guests:

Anne Boney gives you more respins until you get a winning spin worth 15x your wager or higher.

Electric Sam selects a symbol and then collects as many of that symbol as possible. The amount of respins he can give you is unlimited, provided more and more of the selected icon keep dropping on the playing field.

Mr Lake gives you respins until you achieve a five-of-a-kind winning combination.

Camel keeps handing you re-spins until you get between three to five wins.

Finally, Matador selects a symbol and keeps awarding respins until the selected icon is part of a winning combination.

During Happy Spins, one of the Bloopers can randomly appear and place up to three sticky Wilds randomly, which remain sticky during the remaining respins. There are also Walking Wilds which move to the left one reel at a time for every respin.

You can tell ELK Studios went all out with this game. The visuals, the soundtrack and gameplay all come together into something amazing. This is without a doubt a must-play in our opinion if you’re a fan of ELK Studios. You don’t want to miss it.