You are at: Home CORE Gaming Pacific Boom
back to all games
Pacific Boom Slots Game
Game Details 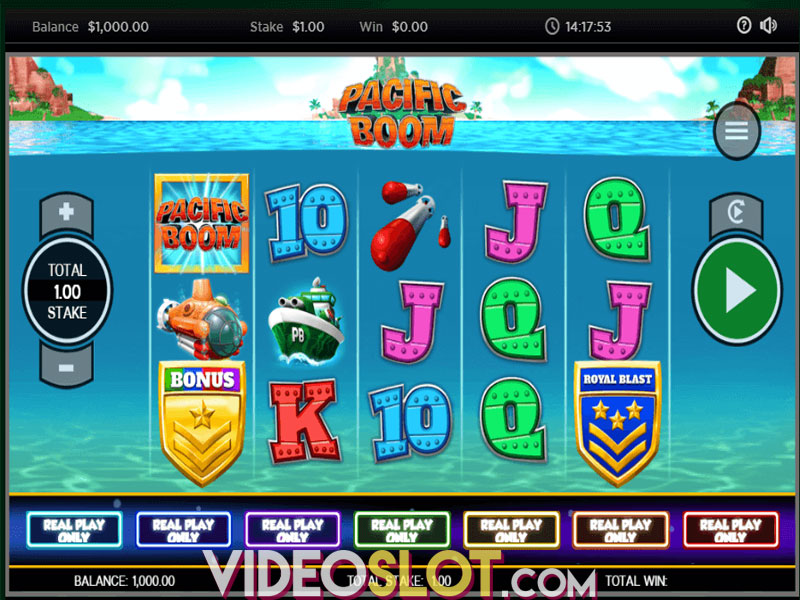 The aspiring software developer CORE Gaming, regulated in the UK by the Gambling Commission, released a video slot named Pacific Boom in March 2018. With pretty basic, cartoonish visuals and a suspenseful soundtrack, this game provides an exciting playing experience. You will be able to benefit from a number of in-play features and four different Bonuses appearing during Free Spins.

Pacific Boom is a 5-reel, 3-row slot with 20 fixed paylines. The game takes place somewhere in the Pacific Ocean and the reels are home to all sorts of water vehicles and weapons. Once the game has fully loaded, make sure you adjust your wager by clicking on the up and down arrows, thus increasing it up to $100 or decreasing it down to $0.20. If at least 3 matching symbols land on consecutive reels on a payline, from left to right, you will be win a payout. To start the game either press Spin or enable Autoplay.

The Pacific Boom logo stands for the game’s most rewarding icon delivering 500 coins when 5 are on a winline. Landing 5 War ship symbols will grant you 400 coins while obtaining 5 Submarines or Torpedoes awards 300 coins. Playing card symbols 10 through Ace deliver 100 and 200 coins for 5 of a kind. A Mine represents Wild that can replace all other icons except Bonus. Obtaining 5 Wilds additionally awards a cash prize of 500 coins.

During the base game four Bonus modifiers can be randomly triggered, Deep Wilds, Wild Drop, Up Periscope and Radar Wilds increasing your winning chances. No less than four Bonus icons appear on the 5th reel, each activating a different Bonus Round, called the Mine Runner, Royal Blast, Wild Ranks and Battlesubs. Two regular Bonus icons on the 1st and 3rd reel, alongside with one of the special Bonus symbols on reel 5 trigger the corresponding feature. The Wild Ranks free spins during which you can collect medals to turn icons Wild will certainly boost your balance. So will the Battlesubs Free Spins where Sticky Wilds and Multipliers are active. In the Royal Blast, low-value icons will be blown away from the grid offering opportunities of bigger wins. The Mine Runner will help you hunt for Multipliers to increase prizes.

Since Pacific Boom is available on all devices, mobile, tablet and desktop alike, you can play it at home or when you are on the go. Enjoy its numerous and interesting features played with a theoretical RTP 95.08%.