You are at: Home Big Time Gaming Lil Devil
back to all games
Lil Devil Slots Game
Game Details 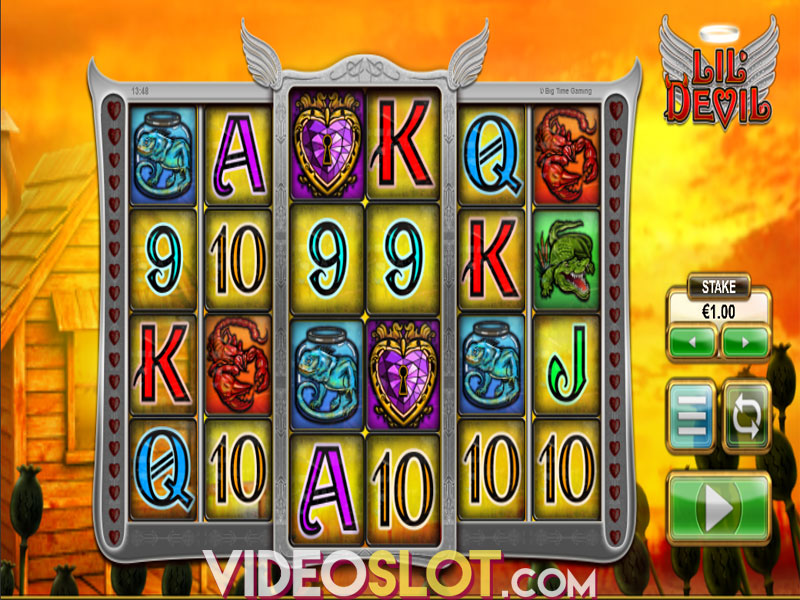 The epic battle of good versus evil has already been used by online slot developers, but the Lil Devil game from Big Time Gaming represents a different take on this theme. It draws its inspiration from the song released by the popular band The Cult. This 6-reel release is bringing this never-ending fight to the reels once again, promising a decent playing experience, whilst at the same time offering prizes of up to 40,960x the triggering bet. Playable from $0.10, this game comes with 2 Free Spins bonus rounds, two wilds, a Scatter symbol, sticky Wilds, and multipliers.

The game is a bit unusual, at least visually, with lots of yellow and orange colour in the background, along with a wooden hut. Not your usual setting when it comes to the battle of good versus evil, isn't it? This Big Time Gaming titles features a reel set consisting of 6 reels and 4 rows, while instead of traditional paylines, there are 4,096 different ways to win. A minimum of 2 matching symbols is required to start getting paid, with winning combinations formed from left to the right, starting from the leftmost reel.

In terms of its appearance, Lil Devil is nothing special and probably won't sweep you off your feet. On the reels, players will encounter a wide variety of icons, starting from the usual low-paying card suits, to crocodiles, scorpions, reptiles and purple hearts with locks. The latter symbol is also the highest-paying one, awarding payouts worth 10 times your wager for a winning combination of 6 matching icons. There are 2 types of Wilds – Devil Wilds and Angel Wilds. The former appears on all reels save the leftmost one, while the latter can only land on reels 3 and 4. They both can replace other symbols, except for Scatter, while Angel Wilds can appear stacked on the grid, bringing multipliers with them. Scatter awards a payout of its own and gives players the chance to choose one of 2 available bonus features.

As we've already mentioned, Angel Wilds can appear stacked on the reels, while the individual multipliers they bring along can range between 4x and 12x. When combined, these multipliers can increase your winnings by up to 144x.

Once the Free Spins bonus round is triggered, players can choose between two options:

Be My Angel awards 7 spins, and turns a regular icon into sticky Wild. If an entire reel is filled with sticky Wilds, additional 3 spins will be added to the count. Dynamite Lovers starts with 12 spins while cascading reels will be responsible for creating winning combos. This variant also features Dynamite Wilds, available on reels 3 and 4.

Collecting Heart symbols, which are awarded when only 2 Scatters land, can trigger the Heartstopper Enhanced variant of the Free Spins feature. If you manage to do so, you'll get an additional sticky Wild and a 5x multiplier.

Although at first, this game may not appear interesting, it does have a nice winning potential and can become a very popular addition to Big Time Gaming. It offers a distinctive playing experience, with big multipliers and Angel Wilds being its most appealing part. Filling the reels with Heart symbols award the biggest prizes of 40,960x the stake!