You are at: Home Amatic Dragons Gift
back to all games
Dragons Gift Slots Game
Game Details 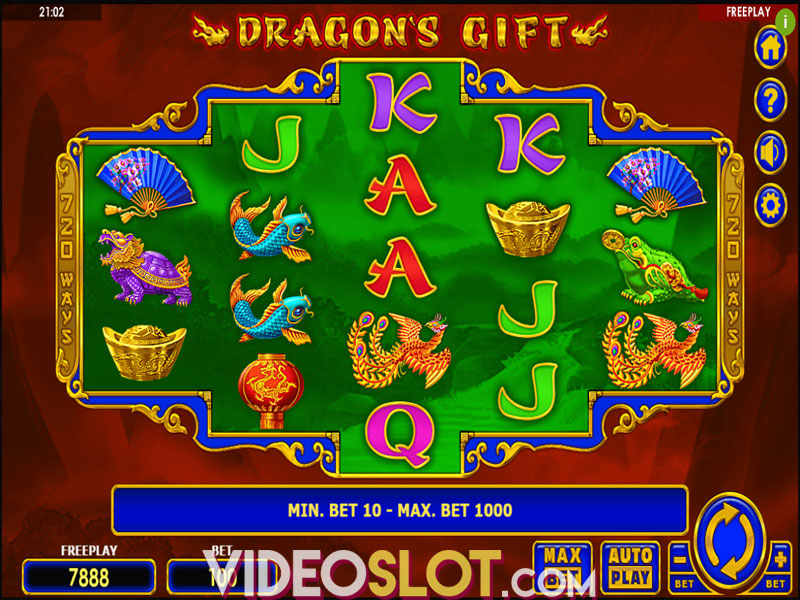 In the distant lands of the far-east, dragons take up much different shapes. Serpentine and wise, their presence has been felt in many stories from Chinese mythology, and they remain a popular character to this day, as a result. It is no surprise that Amatic decided to create a slot based around the dragon, and the gift it offers to players of its game. And what is that prize, you may ask? The wonders of fluid animations, a different playing field compared to the usual, and some delightful bonuses to fill our pockets. The maximum win is worth 500x your total bet.

Dragon’s Gift is a 5-reel title with varying heights and 720 ways to win, forgoing traditional paylines. Gamblers can set their wagers between $0.10 up to $100 per spin. Tap the spin button in the lower right corner, and watch as the reels come to life, revealing new symbols as they appear above the Chinese landscape in the background. However, if tapping away at a single button is not your style, simply press the Autoplay button instead. It will keep spinning the reels until you have no money remaining, or when you stop it manually.

On the playing field, you will find several intriguing icons waiting to catch your attention. Red-golden lanterns, the golden Chinese hat, a blue fan with a gorgeous tree branch design, statues of fish, frogs, dragon turtles and phoenixes made out of precious metals, a proud, serpentine dragon, and a beautiful pearl surrounded by dragon fire. The only icons that break this impressive showing are playing card royals: J, Q, K and A, with their bright colours and lack of any Chinese decorations.

Collect three, four or five pearl Scatters and 5 free spins are granted with five being available if three or more Scatters are collected while the special feature is active. During the bonus, Wilds are guaranteed on the third reel and can appear on the second and fourth reel. Free spins are played until all extra turns are spent.

Dragon’s Gift is a medium variance slot with an unknown RTP. As a result, we cannot recommend playing this Amatic release, as we have no information on the house edge. It has an awesome free spins bonus and the visuals which are not amazing but look decent enough to make the game enjoyable. Until the RTP information is revealed by the developers, we recommend skipping this title and playing something else.