You are at: Home 1X2 Gaming Reel Diamonds
back to all games
Reel Diamonds Slots Game
Game Details 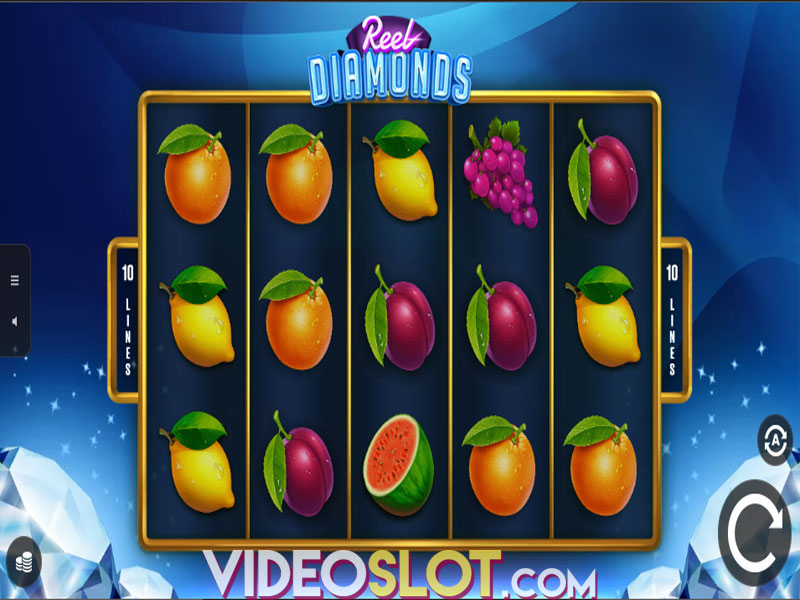 A classy, elegant video slot is coming our way, courtesy of 1x2 Gaming. Reel Diamonds is the latest sparkling addition to their portfolio. Housing crisp visuals, the 2021 release features five reels, three rows, and benefits from 10 fixed paylines. Playable from $0.10 per spin, Reel Diamonds has only one additional feature, in the form of expanding Diamond Wilds, which can cover entire reels. It resembles the Starburst video slot from NetEnt, only Reel Diamonds offers a much bigger max payout, set at 3,100x bet. This medium volatility game comes with an RTP of 96%.

As for the rules of the game, given the fact that Reel Diamonds is a classic fruit machine in its essence, it’s far from complicated to learn how everything functions around here. We have five reels, three rows, and 10 fixed paylines, which pay left to right, starting from the leftmost reel. Three of a kind is the minimum for landing payouts. Betting is fixed at 10 coins per spin, but the coin value can be altered, and players can wager between $0.10 and $100. Such a wide betting range will certainly attract both penny punters and high rollers.

The game is very simple, but extremely elegant, with classy visuals and a fitting soundtrack. The reels are set in a golden frame, with four sparkling diamonds placed at the bottom of the screen. The blue background really stresses the brightness of the jewels. As for the symbols populating the reels, they can be found in almost every classic fruit game. The Diamond is the Wild that can substitute for every other symbol. The Golden and the Silver Stars are the two Scatters, but they only pay anywhere, they do not trigger features. Lucky Seven is leading the group of regular symbols, followed by the Watermelon, Grapes, Plum, Orange, Lemon, and Cherries.

There is not much to say about the special features in the 1X2 GAMING title. This is a classic fruit machine and the only additional feature players can benefit from is the expanding Diamond Wild. The Wild can appear on all reels but the first, and every time you land a Wild, it will expand to cover the entire reel.

Now, you can land more Wilds at the same time, meaning that you can get more Wild reels in the same spin. Up to four Wild reels can be formed in a single spin, resulting in mouthwatering payouts. The biggest win you can expect is set at 3,100x bet per single spin.

1X2 Gaming’s Reel Classics edition got a sparkling new member in February 2021. There are plenty of similarities with NetEnt’s Starburst, especially when talking about the expanding Wild. The game looks and sounds great, and is not intended for action junkies. Those of you who are looking for simple fun, with no complicated features on the offer, should consider taking Reel Diamonds for a spin. If a feature-packed video slot is what you are looking for, then you should look for fun elsewhere.