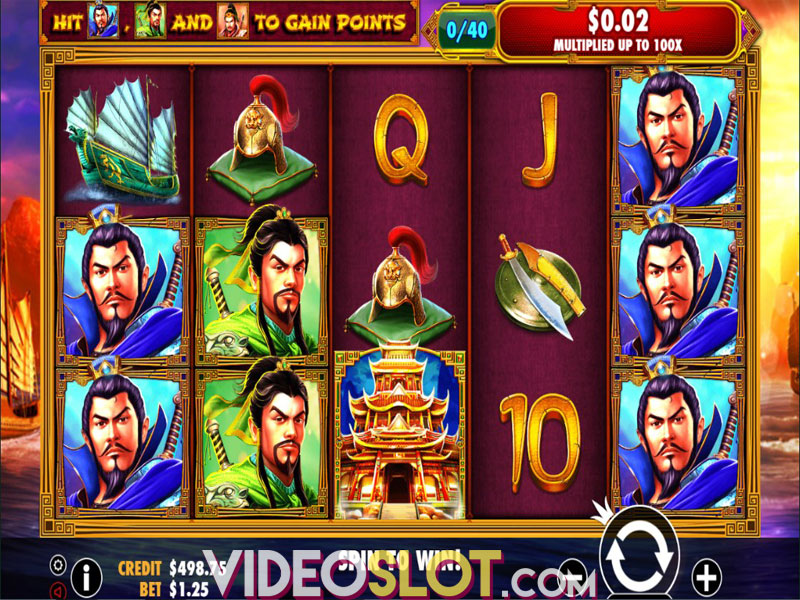 3 Kingdoms – Battle of Red Cliffs is yet another Chinese-themed slot. Three fearless generals are the main characters of this online spinner, but you should not be afraid of them as they fight against each other. Sun Quan, Liu Bei and Cao Cao were the rulers of Kingdom of Shu, Kingdom of Wu and Wei respectively back in 208 A.D. An endless ocean appears in the backdrop of the main window, whilst symbols landing on the spinning reels are all related to the theme.

3 Kingdoms – Battle of Red Cliffs is a played on a 5-reel screen with 25 fixed paylines. A stake, on the other hand, is adjustable, with gamers having an option to bet from $0.25 up to $125.00 per spin. The Autoplay feature is going to help you speed up the game play and enjoy up to 100 automatic spins.

As usual, playing cards from 9s through As act as low paying icons in this video slot while Helmet, Saber and Ship sit in the middle of paytable. Aforementioned generals Sun Quan, Liu Bei and Cao Cao are the highest paying symbols of the Pragmatic Play product, with five Liu Bei icons earning you up to 200 coins. As always, all symbols pay left to right starting from the leftmost reel.

Wild is depicted as the Red Flag blowing in the wind and can substitute for all symbols except for Scatter. The Chinese Temple acts as Scatter in this slot machine, with three of these triggering the Battle of Red Cliffs Free Spins round when appearing on the reels 1, 3 or 5.

To make things even better, 3 Kingdoms – Battle of Red Cliffs benefits from the Spoils of War Progressive feature where you need to select an envelope containing various multipliers up to 100x. Create winning combinations with general symbols to enter the progressive game.

The Pragmatic Play release that will help you revive the story of the legendary battle of the three Chinese kingdoms benefits from two lucrative bonus features and brags an RTP of 96.5%. Taking everything into account, the mobile-optimized slot machine is definitely worth a try.