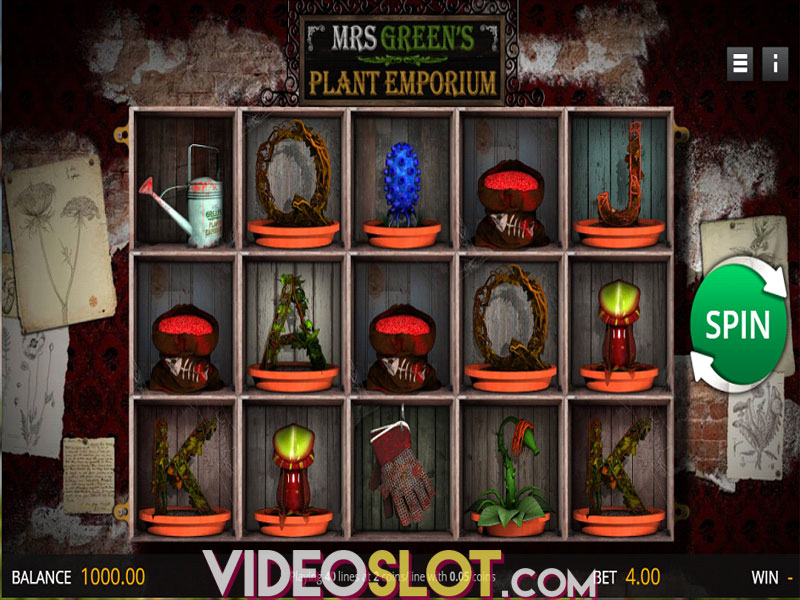 Credit where it’s due, we can’t say we’ve ever expected a slot based around the horrors of the garden shed. And fortunately for your back, we’re not talking about pulling weeds. Instead, we’re more talking about killer weeds that rose up from your garden and intend to use your remains as fertilizer, which probably isn’t good for you in entirety, so better yank those weeds out while you can. Of course, you can always avoid such a grizzly fate by just going across the door and visiting dear, sweet Mrs Green. Not like anything bad could possibly happen.. right? This Saucify slot was released in December 2017, with a medium volatility and a 200x fixed jackpot for the most valuable symbol’s five-of-a-kind win. It offers expanding Wilds and free spins to spice up the tedium of just spinning over and over, waiting for a big win to land.

As we already mentioned, the whole thing has a very unique theme. We don’t usually venture into florist shops unless a significant other’s birthday is coming up, and our concept of gardening is making sure the grass doesn’t grow too large, and that’s about it. The idea of some dingy shop where a mad woman is creating living plants that hiss and taunt you as you walk by them in an effort to find her, only to meet your gruesome end is something we found ourselves enjoying. It has various plants that show their more deadly sides in animations when part of a winning combination, as well as a pair of gloves, fertilizer that looks awfully bloody for some reason, and a watering can. Alongside these unique symbols, you will also find J, Q, K and A, made out of vines. It just lacks a bit of polish in its presentation. The user interface is somewhat awkward to navigate, we’ve accidentally closed the game a number of times, and the somewhat creepy music cuts out entirely when you enter the menu, which messes up the immersion somewhat.

What about special features? Officially, there are two – expanding Wilds and free spins. Free spins are activated by collecting three, four or five Scatters, which will reward ten, fifteen and twenty extra turns, respectively. During free spins, all wins are doubled, and the feature itself can be retriggered by collecting three or more Scatters all over again. The expanding Wilds, meanwhile, only appear during the second and fourth reel during gameplay, but when free spins are active, they instead appear on the first, third and fifth reel, increasing the odds of completing a winning combination. We liked the fact that there’s something to change gameplay around a bit during normal spins, as well, but often times, it doesn’t feel like there’s enough to really make things stand out. Expanding Wilds aren’t rare, but wins with feel undertuned currently.

Our final rating for Mrs Green’s Plant Emporium is that it shows good potential from Saucify, but it needed a bit more polish to really make it shine. The gameplay loop could have used another feature, or to make expanding Wilds more frequent, the pays feel a bit on the low side, and free spins can often feel a bit underwhelming. We recommend giving it a go yourself just to see what it’s like, but it doesn’t feel like a complete experience, unfortunately.