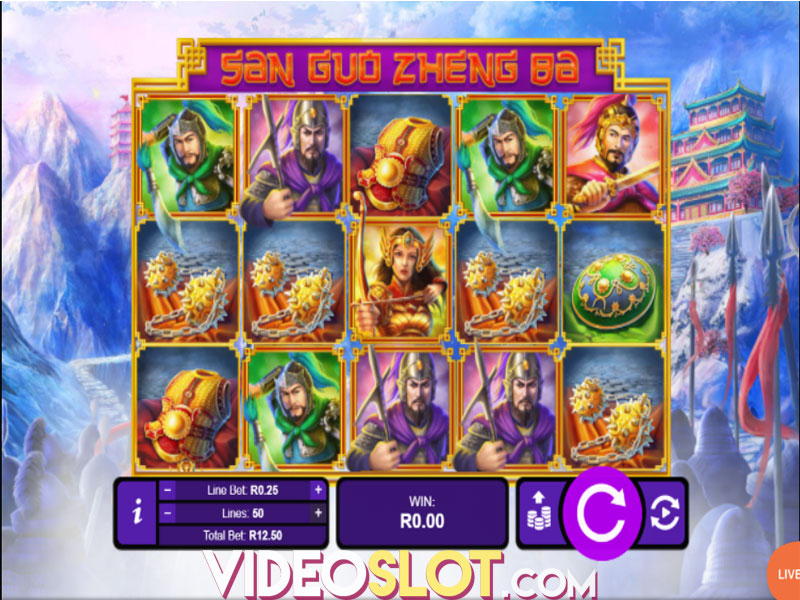 Realtime Gaming is taking its players to another thrilling Oriental adventure, set in the bloodiest period of Chinese history. The Three Kingdoms War was a turning point for the world’s most populous country, and now, for the first time ever, this period has come to life in a video slot game titled San Guo Zheng Ba which hit the market in summer 2018. You’ll encounter the Golden Dragon, Emperor and Empress in this colourful 5-reel 3-row game with 50 paylines. Players will definitely benefit from the Free Spins and the God Spin games where Wilds will double and even triple payouts. The top prize can go up to 50,000 coins in a single spin.

San Guo Zheng Ba features 5 reels and 50 adjustable paylines, while its betting options should definitely suit a wide audience of players, from penny punters all the way to seasoned high rollers. The game’s coin denomination is set from $0.01 to $10, while the wagering can be as low as $0.01 for a single active payline or go up to $500 per spin. Other on-screen options include Max Bet, which is pretty much self-explanatory and the Auto Play functionality, where players can choose the number of spins to be played automatically and just sit back and relax while the reels spin.

The reels are populated by with symbols matching the whole theme. Low-value icons are armours, helmets, maces and shields, while the symbols that pay out more include warriors, the Empress and the Emperor. The Golden Dragon is the game’s Wild which appears only on the reel 3 during the main game to cover all positions when it lands, substituting for all symbols except for Scatter.

Emperor Scatter has the power to activate two different Bonus rounds. Land 3 Emperor Scatters anywhere on the reels and you will trigger the San Guo Zheng Ba Free Games feature and get 5 free spins. During this feature, Wilds show up on the reels 2, 3, 4 and 5 while all wins with Wilds included will be doubled. The feature can be retriggered up to 5x but first you will play 3 God Spin Free Games. Depending on the number of Scatters that paid prizes in San Guo Zheng Ba Free Games, players will get upgrades during this round. Up to 5 Wild reels wait for those with enough luck, along with Scatters paying 5x your bet and Wild acting as a 3x multiplier. And that’s not all, since any Scatter that lands during this feature will award an additional God Spin.

First of all, San Guo Zheng Ba is a nicely designed game, with enough features to offer an exciting gameplay. If you’re a history fan, or you simply enjoy playing Asian-themed games, this medium variance title can easily become one of your favourites, so be sure to give it a try. You can find it at any online casino powered by Realtime Gaming.