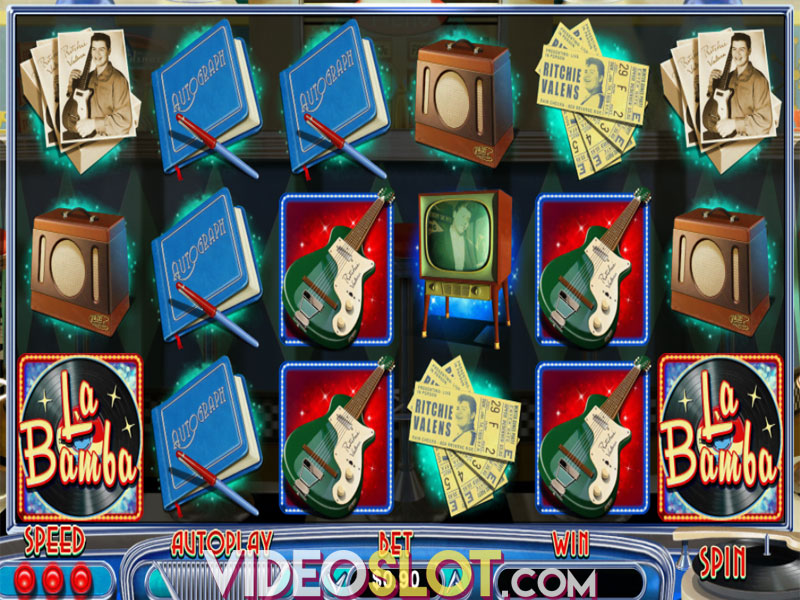 Welcome to the dance floor. Ritchie Valens La Bamba is a music-themed slot which is widely expected to get you in a happy mood. Ritchie Valens, the famous American singer, songwriter and guitarist is the main character of the online spinner coming from the RTG creative kitchen and listening to his music could prove to be a boost to your casino account. The developers have decided to take us back to the Golden Age of Rock, so put your dancing shoes and give this entertaining video slot a try.

The Ritchie Valens La Bamba slot is played on a six-reel screen where all ways pay. The All Ways Pays system offers 729 combinations in total. A retro diner appears in the backdrop of the main window, with authentic symbols from 1950’s landing on the spinning reels. While playing the game, you will listen to Ritchie Valens’ popular hits, but you should not get carried away as the max bet per spin is no less than $150.00. Low-limit players, though, can bet $0.30 per spin as the minimum. Gamers can speed up the game whenever they want, with the Autoplay feature helping them spin the reels automatically. As usual, matching three or more identical symbols will earn you a cash prize.

The retro radio set, photos of Valens and autograph book act as low-paying symbols in this slot machine, whilst old-style TV, electric guitar and Ritchie Valens badge award bigger payouts. Wild is depicted as Ritchie Valens himself and it substitutes for any other regular icon appearing on the reels, two, three, four and five. It is important to note that each winning combination that includes Wild symbol is doubled. The La Bamba Record symbol act as Scatter in the RTG release, with four of these triggering the Free Games feature when landing on adjacent reels. Players are then treated with up to 20 free spins with random multipliers. If you land 6 Scatters, you will be given more expanding Wild symbols on the reels 1 and 6. This bonus feature can be retriggered anytime, with gamers being awarded with 20 free games for each and every retrigger.

Speaking of the maximum payouts, players can win up to 6,000x their stake. The biggest payouts can be secured during the Free Games feature as a number of expanding multiplying Wilds land on the reels.

Ritchie Valens La Bamba is pretty exiting video slot. If you like retro slot machines, this is the right place for you. Ritchie Valens tragically died in a plane crash back in 1959, but his music will live forever. RTG did well to help you revive the story of the legendary rock singer and seeing that this online slot machine offers a lucrative special feature, you should give it a spin or two.