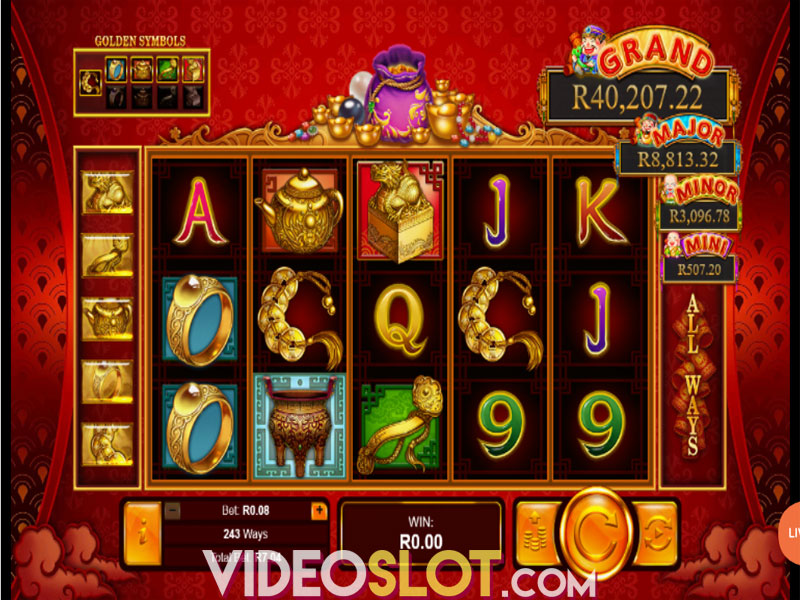 Plentiful Treasure provides players with an opportunity to set out on an exciting journey to the ancient Chinese kingdom and meet the wise gods living in abundance. The good news is they are more than willing to help you lay your hands on some of their massive riches! The amazing title is loaded with rewarding features, including the Gold Coin feature, Free Spins, 5x multipliers and even four progressive jackpots! The top-prize up for grabs is 50,000x the bet.

Plentiful Treasure is a 5-reel slot machine offering 243 ways to win. Before you start rolling, it's advisable to adjust the stake, ranging from $0.64 to $70.40 per spin. Keep in mind that the value of your stake will determine the number of golden coins you activate, which consequently allows you to trigger more progressive jackpots. The Autospin button will turn the reels without interruption for a chosen number of times, while clicking on the circular arrow will set the reels in motion.

The reels are populated by four different gods that will help you activate the Gold Coin feature. In addition, punters will come across traditional symbols from Chinese folklore such as bowls, rings, caskets, teapots and necklaces. There are two Wilds in the game. The first one being the Bao symbol which pops on the reels 2, 3 and 4 substituting for all other icons except for Scatters. The second Wild is depicted by a pearl and enhanced with a 5x multiplier. It lands exclusively on the reel 3. Scatters are represented by Tripods and they activate the Free Spins feature.

Land not less than three Tripod Scatters anywhere in view to trigger the Free Spins feature awarding 8 free spins during which only high-value icons will appear on the reels. Moreover, free spins can be re-triggered.

The RTG release boasts two Wilds – Pearl that can appear only on the third reel, multiplying each win it contributes to by 5x. On the other hand, Bao character may randomly activate the Gold Coin feature where players can win one of four progressive jackpots – Mini, Minor, Major and Grand Jackpot. Once you activate the feature, you will get to select from 12 golden coins. If you are fortunate enough to find three matching god characters, you will grab one of the four jackpots on offer.

Plentiful Treasure is a medium variance slot, yet its RTP is unknown. Speaking of the theme, we've already seen a number of similar slots, so there is nothing much impressive about it. Betting range could've been wider, too. Nonetheless, we love the fact that the game offers no less than four progressive jackpots and free spins that can rack up some serious rewards. The highest potential win is a mouth-watering 50,000x your stake.