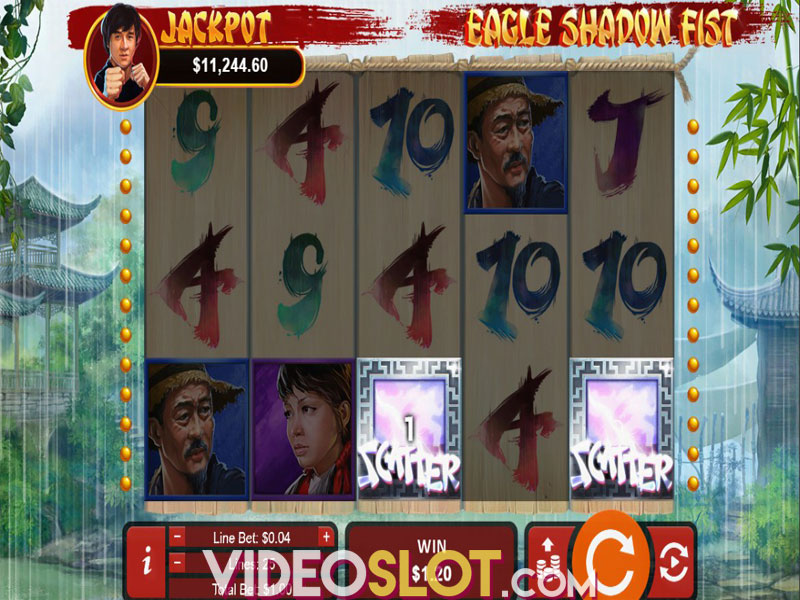 With the Eagle Shadow Fist slot machine, Realtime Gaming invites players to embark on an exciting adventure supported by the fearless protagonist Jackie Chan himself. The game is themed around the 1973 martial arts film of the same name and the Japanese occupation of China during the Second World War. The military-themed release benefits from multiplying Wilds and the Free Spins feature awarding 20 free games with up to 4x multiplier, as well as a progressive jackpot and the fixed top-prize of 10,000 coins.

Eagle Shadow Fist features 5 reels and 25 paylines that pay left to right. Before you start rolling, we would advise you to adjust your stake ranging from $0.25 up to a ceiling of $25. Click on Menu to access Player and Autoplay Options. Player Options will allow for adjusting the volume, turning full screen mode on and off, mute sound or adjust the speed. Autoplay will spin the reels automatically for a chosen number of times, whereas Spin will set the reels in motion.

The symbols populating the reels are mostly theme-related and include the Kung Fu fighter – Hao Li, Qiu Yuen – the female martial artist, the Villain, the Peasant, and Jackie Chen himself. Scatters are represented by martial arts fighting scene, while Wilds come in the form of an animated fist that substitute for all other symbols to form a winning apart from Scatter symbols.

Whenever at least one Wild contributes to a winning, the winning will be doubled.

To trigger the Free Spins feature, you are required to land at least three Scatters anywhere in view, which will in turn award 20 free spins. Keep in mind that the number of Scatters you land will determine the multiplier for your wins, so landing three of them will double your balance, whereas landing four Scatters will multiply your balance by 3x. Finally, if you manage to hit five Scatters, your payout will be multiplied by 4x. The Free Spins feature can also be re-triggered, and the multiplier you got will be active for the duration of additional spins.

The highest potential win on Eagle Shadow slots is 50,000 coins. Wild is the most lucrative symbols awarding 10,000 coins for five of a kind. The progressive jackpot can be triggered at random at the conclusion of any spin, regardless of the outcome.

The RTG release is a highly volatile video slot featuring high-end graphics and smooth animations that will easily immerse you in the gameplay, regardless whether you like the movie or not. The main selling point is, no doubt, the Free Spins feature awarding 20 free spins, which are enhanced with up to 4x multipliers, however, we must admit that they are a bit hard to trigger.