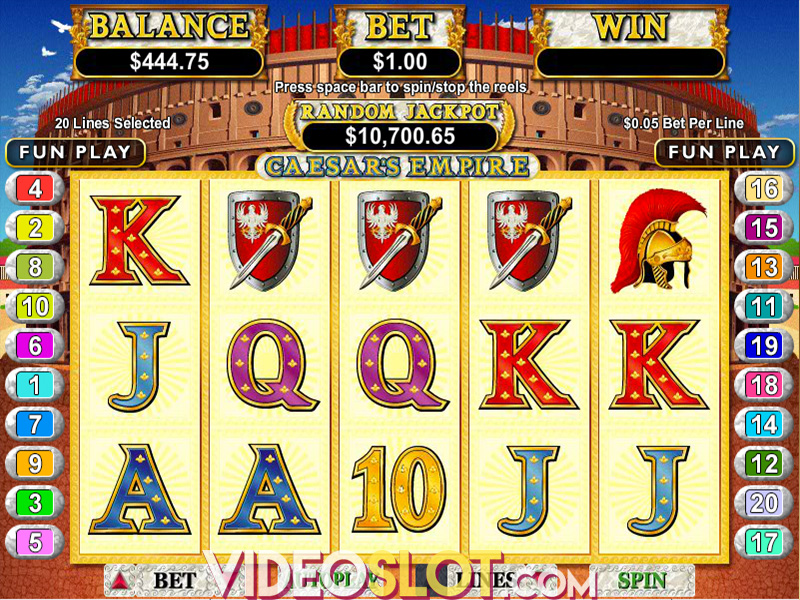 Caesar’s Empire was one of the first video slots from RTG to gain huge popularity and this game is still a top choice for many players at online casinos. The game offers five reels of action and 20 paylines, so there are many ways to create winning combinations and enjoy massive returns. The game has some superb special features and also features a progressive jackpot that can be won.

In the main game, players will see a gold coin that is the wild and this will appear on reels 1, 2, 3 and 4. It will take the place of all game symbols with the exception of the scatter, which is the coliseum symbol. The wild will not award its own payouts but will triple the amount that is won when it is used in a winning combination. Players who get two or more scatters anywhere eon the reels will enjoy an instant payout and this can be as high as 100x the bet amount if five scatters appear.

There is a nice bonus feature in the game and this is triggered by getting a wild on reel 1 and a coliseum on reel 5. This will activate the game bonus round where players will get 10 free spins on the game. Every payout is worth two times the normal amount and players can get five more free spins with each Caesar symbol that lands on reel five.

The highlight of the game is the random progressive jackpot hat can be won. Players will not have to place a maximum bet on the game to be eligible and will not need any specific symbols or combinations on the reels. The jackpot will be awarded at random, allowing any real money player to have the chance to be the next big winner.

Caesar’s Empire is a well designed game that features a popular Roman theme. Though the game lacks some animations, it does offer a nice visual appeal and players will be thrilled with the triple wild payouts as well as the double rewards earned in the bonus round.