You are at: Home Pragmatic Play Joker Jewels
back to all games
Joker Jewels Slots Game
Game Details 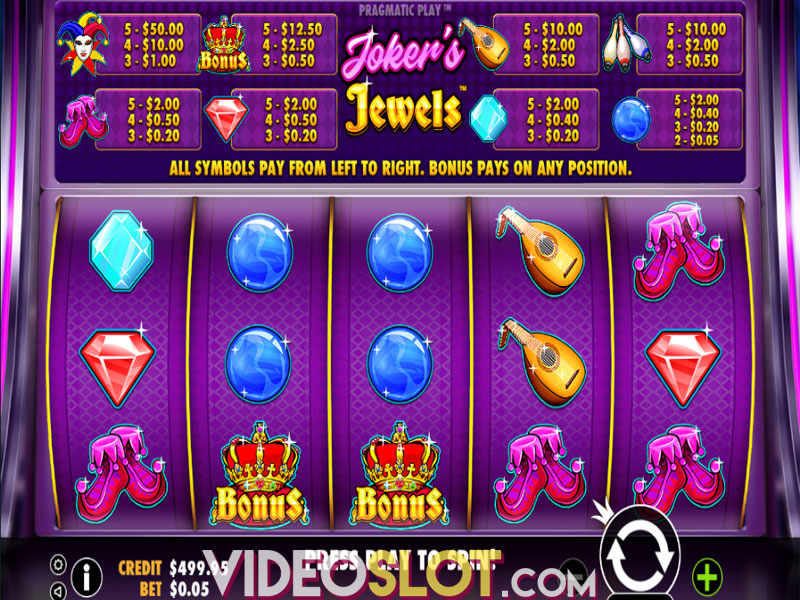 A dedicated team of slot developers known for their creativity, Pragmatic Play, has brought us this amazing slot game called Joker’s Jewels. This is a game for all those who love straightforward, no-nonsense gameplay because it’s simple and anyone who has fantasized about going back in time and experiencing a stripped-back game will certainly love this one. Joker might be the mascot, but the game doesn’t offer many features, which is something old-school slot lovers will certainly appreciate.

It’s a simple 5-reel, 5-payline slot game that’s as simple as it gets, so don’t expect any bonuses or Free Spins. With only three rows and eight symbols, you’ll get to spin the reels, hold your breath and pay attention to the flashing paytable. Even though you won’t find any of the modern bonus features in this slot game, you can keep an eye out for a jewel-encrusted crown, which represents Scatter. Still, you are going to need at least three crowns to win anything. Fortunately, they can be anywhere in view and not stacked together.

As far as symbols are concerned, they are the Joker, the highest value awarding 1000x your bet for five on a payline, his lute and a set of juggling skittles. The list goes on and you can see a pair of pink boots as well as three differently coloured jewels, light and dark blue as well as red.

Because the game is so simple, all you need to do is pick the bet that suits you best. Before you start, press either the plus or minus button located on either side of the spinner. This will cause a pop-up window to activate allowing you to choose the number of coins you will bet as well as their value. Coins are worth anywhere between $0.01 and $0.50.

While it may not have plenty of additional features, the game will be appealing to everyone who wants to feel like they’re playing on an actual slot machine because of its simplistic design and sounds. On the other hand, sounds can be overwhelming at times, but you can control audio settings and turn the sound off if you want.