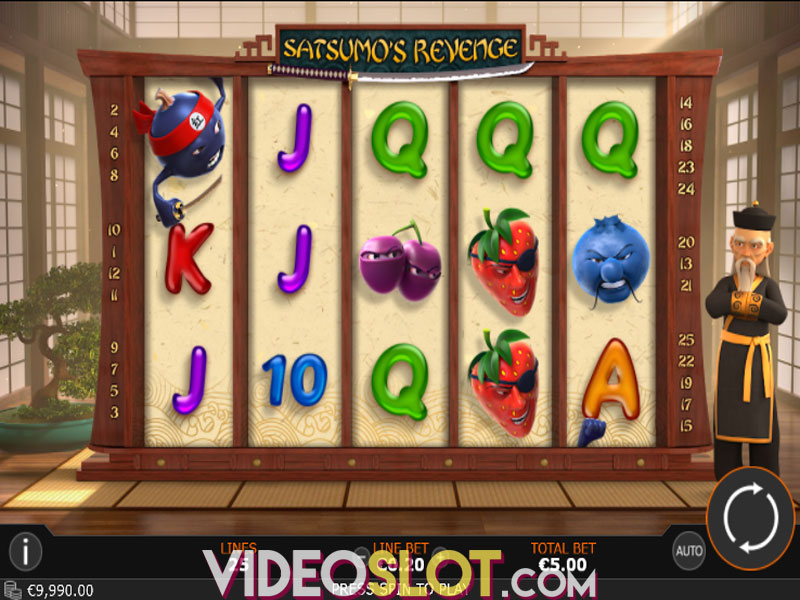 Satsumo’s Revenge Slot is a Playtech release inspired by martial arts. The Grandmaster uses his shuriken to turn reels completely Wild in the online spinner, whilst matching identical fruit symbols is going to help you earn lucrative cash prizes. An alluring martial arts dojo is the setting for this video slot which offers an exciting bonus game.

Satsumo’s Revenge is played on a 5-reel screen with 25 fixed paylines. A coin value ranges from $0.01 to $20, with players having the option to bet up to $500 per spin. You can always hit the Autoplay button if you want to play faster. Playing cards from 10s to As act as low-paying icons in this slot machine, whereas fruit symbols award bigger prizes. Landing 5 Blueberries or Grapes pays out 150 coins, whereas hitting five Limes will earn you 300 coins. Five Strawberries are worth 300 coins as well. Satsumo itself is the highest paying symbol of this video slot, with five of these awarding 1,000 coins.

Wild symbol is depicted as the Golden Dragon which, as usual, can substitute for any regular symbol. However, this is not the only Wild that will appear on the spinning reels in the Satsumo’s Revenge slot as the Shuriken (Ninja Star) triggers Shuriken Wilds when landing on the reel 5. The aforementioned Grandmaster uses his power to turn up to 3 reels fully Wild. These stacked reels come with some lucrative multipliers, too.

Speaking of bonus features, the Fighting Free Games feature is the highlight of the Satsumo’s Revenge slot. Landing Fighting Fruit Scatter symbols on both the reels 1 and 5 on the same spin will trigger this feature where gamers will take part in several rock-paper-scissors contests.

The game starts with 5 lives per fighter and you need to win as many battles as possible. You will be treated with 1 free spin and a sticky Wild symbol if you win one round. Playing out a draw with your opponent will award you only 1 free spin, whereas losing a round results in losing a life. The bonus game ends when one of the fighters losses all five lives.

Sastsumo’s Revenge brags 91.60% RTP, which is anything but good return to player percentage, but we have to admit that the game is pretty entertaining, which is the main reason why slot enthusiasts will find the Playtech title attractive. Anyhow, you don’t need to learn martial arts to benefit from playing this completely mobile-optimized slot machine.