You are at: Home Playtech Eliminators
back to all games
Eliminators Slots Game
Game Details 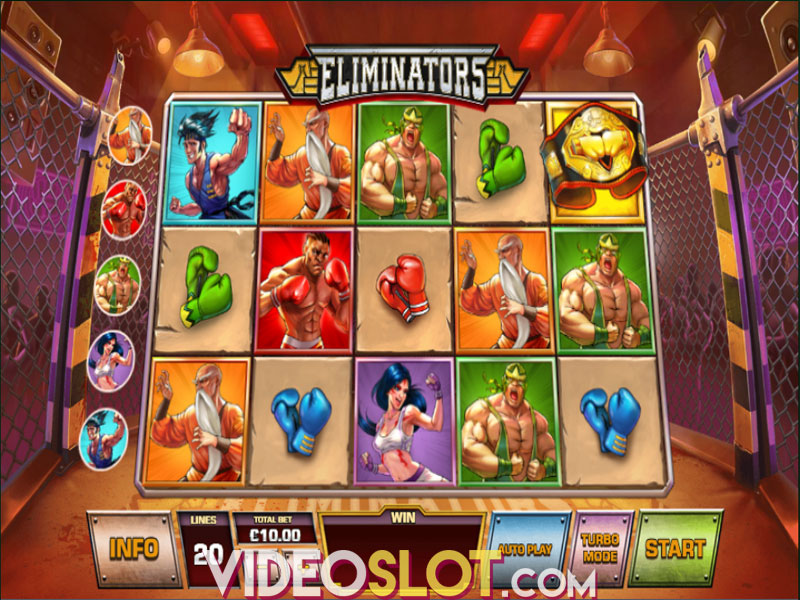 Eliminators is a Playtech release from May 2018 in which you will fight opponents tooth and nail. The video slot offers opportunities of securing up to 625,000 coins owing to Collapsing Reels, 2 Free Spins Games, Wild Substitutions and a Bonus Round. Watch out, though, for you may experience an adrenaline rush once you enter the MMA cage under spotlights, depicted faithfully in vivid graphics and boasting excellent animations.

Eliminators is a 5-reel, 3-row slot with 20 fixed paylines to wager bets from $0.20 up to $500 per spin. Start the game either by tapping the Spin button or by enabling Autoplay to spin the reels automatically.When symbols appear on a payline starting from the leftmost position on adjacent reels, you will be win payouts.

Five Fighters represent high-value symbols delivering from 200 to 2,500 coins for 5 of a kind. Three pairs of fighting gloves award low-value prizes of 50, 75 and 100 coins when 5 appear on a payline. Wild lands on reels 2, 3 and 4, replacing all symbols but Scatter when forming winning combinations. Scatter is depicted as the Champion’s Belt and is in charge of triggering the Free Spins features.

Number of Scatters appearing on the screen determines the number of awarded free spins in the Free Games features. Choose your side and pick either Red Games where 3, 4 and 5 Scatters award 12, 25 and 50 spins or Blue Games in which 3, 4 and 5 Scatters deliver 10, 21 and 40 free spins respectively. Red Games offer chances of receiving a 10x Multiplier, while Blue Games boast a reel set modified to provide greater chances of wins. Both features can be re-activated with up to 50 extra games when 2 or more Scatters hit the reels.With each win, symbols that are part of it disappear and the remaining ones collapse, leaving room for new icons to land. If Fighter symbols form a win, they will disappear, causing all matching Fighter icons to be eliminated from the grid as well. Get rid of all Fighters in just one spin to activate the Champion Bonus where you select a coin to receive a cash prize of up to 40x the total bet.

Available on all devices, mobile, tablet and desktop, Eliminators can be played at home or on your way to work. If you’re a fan of MMA-themed slots you will enjoy this action-packed game where both prizes and excitement are high.