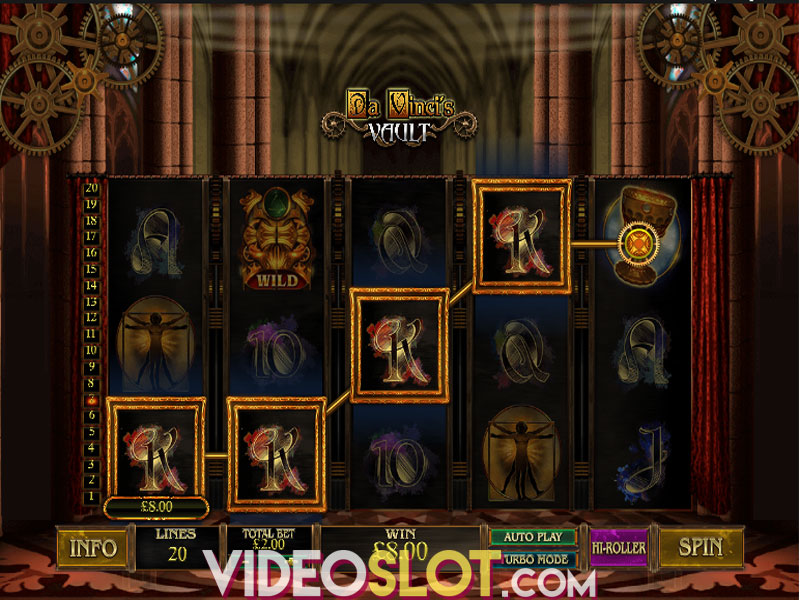 Something gloomy comes our way in the form of a video slot titled Da Vinci’s Vault released in September 2017 by the famous software developer Playtech. The slot has an air of mystery to it, achieved with a sinister soundtrack and dreary design with symbols and features somewhat enigmatic as well.

The 5x3 layout is set in an obscure cathedral offering 20 paylines to wager on. The bet can be set to as low as $0.20 and up to $100 per spin by choosing a line bet from a scale ranging between $0.01 and $5. To get the reels going, tap Spin and when symbols land on consecutive positions from left to right on a payline you will receive payouts. The game can be played automatically for up to 99 times if you initiate Autoplay.

Mona Lisa and the Vitruvian Man are high-value symbols delivering 10,000 and 4,000 coins respectively for 5 of a kind. An Aerial Screw and Golden Chalice award 1,500 coins each for 5 matching symbols. Playing card symbols from 10 through Ace stand for low-value icons providing 200 and 300 coins when 5 land on a payline.

The game offers two Wilds both able to replace all other icons but Scatter and Cryptex. One of them is depicted as Mechanical Cogs awarding 10,000 coins for 5 of a kind. The Compass Coin represents Scatter appearing in any position to award up to 1,000 coins. The Scatter feature can be triggered randomly with 2 to 5 Compass Coins distributed across the grid offering chances of greater wins. Landing at least 3 Cryptex symbols on the reels 1, 3 and 5 will grant free spins during which Wild depicted as a Skull lands on the reel 3 and turns regular symbols into Wilds for the remainder of the feature. After contributing to a win combination, Wilds are moved into the Collection area and obtaining 3 ends the feature.

To unlock Vaults with amazing treasures, enter the Hi-Roller Menu where you can wager 10x your bet and collect Bronze, Silver and Gold Seals. Completing a combination will unlock a corresponding vault, offering you opportunities to obtain free spins, another turn of the wheel or massive cash prizes.

Don’t be discouraged by the game’s somewhat low RTP of 94.04%, for this slot provides many possibilities of reaching hefty sums. Fully optimized for play in landscape and portrait modes on smartphones and tablets while retaining the high-quality design of the desktop version, Da Vinci’s Vault can be played at home or on the go.