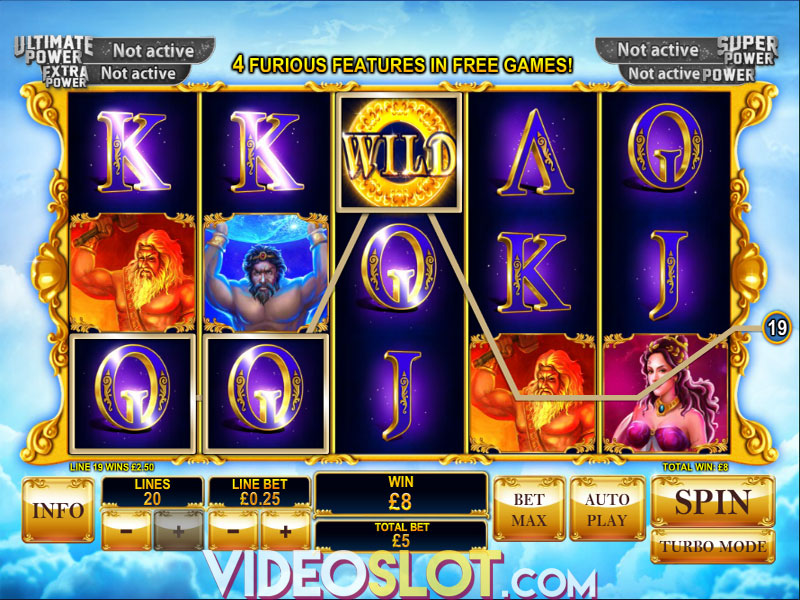 About Age of the Gods Furious 4 Slot
Rating:

In the Furious 4 slot, another installment from the Playtech’s Age of the Gods series, there are four gods leading you through the mythical world of Ancient Greece, Apollo, Pandora, Hephaestus and Atlas. Played at 5 reels and 20 adjustable paylines, with progressive jackpots and multiple bonus features, the video slot playable on all devices provides you not only with an adventurous experience but also with a handful of chances for hefty payouts.

The main screen with dark blue reels and an ornamental golden frame is contrasting the sky background. Symbols include the four gods and 9 to Ace symbols and the theme-related symbols deliver high value payouts. The Furious 4 slot is playable from $0.20 to $500 per spin at the maximum number of paylines active. The Autoplay option is there to save you from the trouble of clicking the spin button over and over again and if you are impatient to see what the gods have prepared for you, you can always turn the Turbo mode on.

The most lucrative symbol is Wild represented as the number 4 on a golden ring, which can reward you with up to 10,000 coins. It substitutes for all the symbols apart from Scatter. Scatter is the golden throne and by landing three or more of them anywhere on the reels, the Free Games feature will be activated. It awards you with 12 free spins, during which 4 Furious features are available. In order to activate one of these features, you need one of the four gods expanding on the middle reel.

Like all the other Age of the Gods slots, Furious 4 also offers 4 progressive jackpots, which can be triggered randomly on any spin. In the Jackpot game there are 20 coins arranged in a 5x4 grid and to hit one of 4 jackpots you have to match 3 of a kind. The Furious 4 slot rates as the game of medium variance and with a betting range going up to $500 it will suit all kinds of players.