You are at: Home News Quickspin’s Joker Strike Slot Brings a Ton of Fun 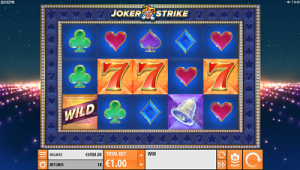 Swedish online games development studio Quickspin has announced the launch of its latest video slot that is bound to generate plenty of interest in the industry.

When it comes to the game’s symbols, players will encounter some traditional ones, such as stars, sevens and playing card suits, which will be accompanied by the Wild and the smiling Joker icon.

Surrounding the reels is an outer wheel that contains small symbols that get lit up when a winning combination is hit, offering the possibility to grab additional prizes.

If the lit symbol matches the one that activated the outer wheel feature, up to 10 additional symbols of that type will get added to the grid, creating additional winning combinations that are immediately paid out. You can get a minimum of 6 extra symbols, but if more of them are in the winning line that triggered the feature, the more of them will be added to the reels.

The higher your bet is, the more chances of landing additional wins you’ll have. Every 5 spins a Wild will land on the reels, while more Wilds can be added to the outer wheel, doubling the player’s chances of matching the triggering symbols. Just remember to be on a lookout for the Joker symbol, since it has the potential to reward the top prizes!

Commenting on the launch of the new video slot, Quickspin Chief Executive Officer Daniel Lindberg said the game’s Hi Roller feature was a great example of the innovation the company brought to the market.

Lindberg added he was sure the game would be a huge hit among Quickpin’s players and operating partners, especially since it captured all of the company’s flair for engaging gameplay and bonus content.

Joker Strike can be played at any Quickspin-powered online casinos.