You are at: Home News Pragmatic Play Takes You to Magic Show with New Vegas Magic Slot 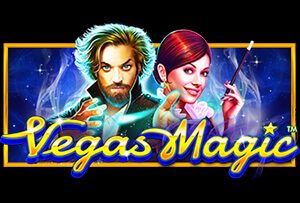 The leading developer of online gaming content Pragmatic Play has recently added a new game to its line-up of video slots.

The new release will take player straight to the world’s capital of gambling and entertainment – Las Vegas, Nevada, and is appropriately named Vegas Magic.

Resembling a real-life stage show, Pragmatic Play’s Vegas Magic is vibrantly coloured and features a top-notch design. The game has been developed in HTML5, meaning it will offer the same level of quality across a wide array of devices.

Vegas Magic has a grid consisting of five reels and three rows, with a total of 20 fixed paylines on offer, with symbols such as flying doves, magician hats, and playing cards populating the reels.

Punters can easily choose their preferred wagers by clicking on the plus or minus arrows located on the screen. The game offers wide betting options, with betting coins ranging from 1 to 10, with each of those being worth from $0.01 to $0.50.

The Wild symbol is represented by a magician, which can substitute for all other game icons bar the Scatter, thus helping players complete more winning combinations.

Wilds can land on the middle three reels (reels 2, 3, and 4), while it also has the power to expand when appearing on the first spin of the game’s Tumble Feature.

The Tumble Feature can prove to be very rewarding, and once it gets activated, you’ll see winning symbols from the previous spin disappear right in front of your eyes. The remaining symbols will drop down, while the new ones will fill the empty places. The best thing about it – you won’t need any additional bet to do so.

There are no limits on the Tumble Feature, which in practice means players are able to create long winning streaks, which will be further enhanced with a multiplier that starts with a 2x after the first win, and then gets increased by 1x with every additional win until the streak gets broken.

Vegas Magic has already gone live and you can play it at any online casino powered by Pragmatic Play.