You are at: Home News Pragmatic Play Adds Vampires vs Wolves to Its Lineup of Video Slots 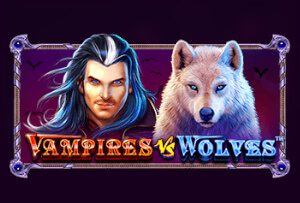 Pragmatic Play launches the newest addition to its portfolio of games.

The epic showdown between Vampires and Wolves is coming to the reels in the latest video slot launched by Pragmatic Play.

Aptly titled Vampires vs Wolves, this fresh release promises an adventure of epic proportions, along with numerous chances to snatch handsome prizes, while players will need to pick a side once the battle begins.

Pick a Side and Win

On the reels, players will encounter both werewolf and vampire symbols. The former can be recognized by a blue border surrounding the outside of the icons, while the latter has a red equivalent, which is natural as it represents their thirst for blood. In addition to these, the game also features the standard set of low-paying playing card symbol.

Vampires vs Wolves features a 5-reel 3-row layout with 10 fixed paylines and is playable on a wide array of desktop and mobile devices.

The Wild symbol is one of the game’s most rewarding icons, offering payouts of up to 1,000 the original stake. Apart from that, the Wild can also substitute for almost all other symbols, helping punters complete more winning combinations.

Wilds can’t substitute for Scatter symbols, as they have a special task. These symbols have the power to completely cover a whole reel, while appearing simultaneously on reels 1 and 5 will trigger the game’s Free Spins round. Once the bonus round is activated, players will have the option to choose whether they want to get 14 Wold Free Spins or 8 Vampire Free Spins.

A Thrilling Free Spins Round

The true nature of these creatures can be seen during the Free Spins round. Wolves will be able to connect with each other and with Wild symbols as well, which can result in the formation of large blocks of winning icons. Vampires will be able to use their special power, transforming into sticky Wilds that remain locked in their position.

Commenting on the launch of this game, Yossi Barzely, Chief Business Development Officer at Pragmatic Play, said his company was delighted to add Vampires vs Wolves to the offering. He pointed out that its smooth gameplay, combined with an immersive theme and thrilling bonus feature, made it one of our most exciting slots yet, while the graphic animation added a whole new level of engagement to the title.

Join the fight at any Pragmatic Play-powered online casino.