You are at: Home News Playson Launches the New Rome: Caesar’s Glory Slot 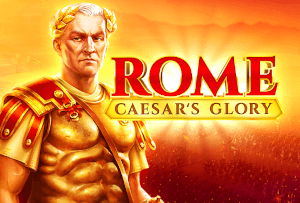 Playson has just announced the launch of the new Roman-themed slot. (Photo: playson.com)

Taking players to Ancient Rome, this interesting addition to the developer’s portfolio will definitely stand out among its rivals in the market.

An Exciting Experience on Offer

Populating the reels are symbols matching the game’s theme, so expect to encounter gold wreaths, Roman generals, the Eagle Scatter, as well as Caesar himself, who serves as the Wild symbol.

With a total of 64 paylines on offer, Rome: Caesar’s Glory will see Wilds expand during the Bonus Spins round, with the aforementioned shields enabling punters to reach not only this feature but also the Bonus Wins round as well.

To help players grab as many prizes as possible, Playson has added a wide offering of features, including Wilds, Scatter, Stacks of Symbols, Bonus Spins, and even the chance to flip the reels while the Bonus Spins Rounds are active.

Get Ready to Win

A progress bar located on-screen allows players to keep track of their progress while they enjoy Rome: Caesar’s Glory slot. Filling an entire reel with Wild symbols will grant them a Bonus Spins prize, along with plenty of other opportunities to trigger payouts. And while the Bonus Spins feature is on, players will still be able to grab more prizes as they flip the reels over!

To celebrate the arrival of this game, Playson even organized a series of slots tournaments. The Christmas March event represented the first phase of the company’s Christmas Story network tournaments, with available prizes reaching €20,000!

Commenting on the release of this exciting new title, Vsevolod Lapin, the head of product development at the renowned gaming company, said he was convinced that Rome: Caesar’s Glory would quickly become popular among those punters looking to score huge wins.

Fight for the glory of Rome at any online casino powered by Playson.