You are at: Home News NetEnt Launches the Sequel to Its Popular Butterfly Staxx Game 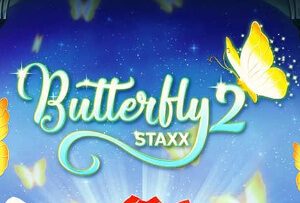 Even more chances to win await in the latest instalment of NetEnt’s popular release. (Photo: netent.com)

NetEnt has recently expanded its lineup of slot games by launching the sequel to its popular Butterfly Staxx game.

Launched two years ago, the original game became a smashing hit among a wide audience of players, and NetEnt hopes the latest instalment would become as equally popular.

Butterfly Staxx 2 comes with a 5-reel 4-row layout and a total of 40 fixed paylines, offering plenty of opportunities to grab handsome prizes, while at the same time offering an entertaining pick and click functionality which should further add to the excitement.

Once the reels start spinning, players will have the chance to activate 3 unique play areas with a single bet, and whenever they succeed in it, each of these areas will spin on its own, both independently and at the same time.
The game’s respin round boasts exciting features, which are triggered whenever players get a minimum of 4 Butterfly symbols in a stack covering the entire reel, or if players pick Butterfly Spin while the Bonus round in on.

The Butterfly Frenzy Round

Probably the most exciting part of this game is the Butterfly Frenzy feature, where players can grab neat prizes by using the pick and click functionality.

This feature consists of 5 stages, with each of them beginning with 10 picks. Choosing additional butterflies boosts the overall winnings, with each subsequent stage building on the wins acquired during prior stages.

This means players can have up to 50 picks!

Commenting on the launch of the new release, Bryan Upton, Director of Games at NetEnt said Butterfly Staxx 2 was a true sequel to the highly successful Butterfly Staxx game, taking a familiar, powerful mechanic that had been amplified to meet the voracious players’ expectations of today.

He pointed out the game showed the industry needed all different types of game.

Upton added that as always, adding enhanced player interaction meant engagement and success, while the multi-level pick-and-click bonus did just that. He described the new release as another modern-day classic in the making.

Both the original game and its new and exciting sequel can be played at any NetEnt-powered online casino.