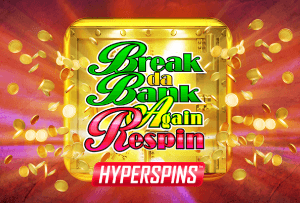 Embark on a fantastic adventure brought to you by Microgaming. (Photo: microgaming.co.uk)

Microgaming has announced the launch of the third and the latest addition to the popular Break da Bank series.

Titled Break da Bank Again Respin, the new is exclusively developed for Microgaming by Gameburger Studios, an independent gaming studio that has recently partnered with the renowned developer.

An Exciting New Addition to the Offer

Break da Bank Again Respin comes with a 5-reel 3-row layout and 9 paylines, featuring all the treasures players had the chance of encountering in the previous Break da Bank games, and more.

In addition to improved graphics, and a higher return to player, the game boasts Hyperspins, the company’s strategic paid respin feature that can prove to be very lucrative.

During the Main Game, the safe symbol serves as the Scatter and has the potential to award neat prizes. Landing 3 or more of these icons will trigger the Free Spins round, while the players will receive 15, 20, or 25 spins, depending on the number of Scatters used to unlock this feature. Once the feature starts, it offers the chance for more frequent triggers, with wins of up to 4,000 times the original bet on offer.

Break da Bank Again Wild also acts as a 5x multiplier in the Main Game, and a 25x multiplier during the Free Spins round. The exciting Respin mechanic allows players to use their gaming strategies, while the ultimate goal of this functionality is to open up the potential for huge prizes.

Commenting on the launch of the new game, James Buchanan Director of Global Operations at Microgaming said that staying true to the popular Break da Bank Again game released in 2008, Break da Bank Again Respin revitalized a highly successful slot by incorporating engaging mechanics with enhanced audiovisuals. He added the game’s high volatility action, coupled with the Hyperspins feature, ensured players could expect a rewarding journey in this classic gem.

Matt Carvajal Creative Designer of Gameburger Studios stated Break da Bank Again Respin delivered high-volatility action with crisp visuals and sounds and was packed with great features. He explained they had created a game that stayed true to the essence of the popular Break da Bank series, building upon it with some core mechanic additions.

Carvajal pointed out they were particularly proud of the Hyperspins feature and added they couldn’t wait for players to experience the game.

Break da Bank Again Respin can be played at any online casino powered by Microgaming.