You are at: Home News Microgaming’s Bookie of Odds Slot Promises Plenty of Excitement 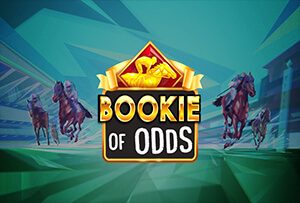 Microgaming has just announced the arrival of its latest addition to the company’s offering, which promises to bring plenty of excitement to the reels, in combination with potentially lucrative feature and somewhat unusual theme.

Developed exclusively for Microgaming by Triple Edge Studio, the new release is titled Bookie of Odds, and as its name suggests, draws its inspiration from the exciting world of horse racing.

A Fun Day at the Races

So get ready for a day at the races in this 5-reel 3-row video slot with a total of 10 fixed paylines. This is a high volatility game, which means the inexperienced players could quickly walk away with empty pockets.

But the game certainly doesn’t lack the features to help punters claim rewarding prizes. Once you enter the betting ring, you’ll encounter a distinctive tote board of symbols matching the game’s theme, including the usual set of low-value playing cards, colts, jockeys, and the Bookie himself.

The gilded Bookie’s Tip Book serves as both Wild and Scatter symbols, which further boost the chances that players have to score a win. At least three Scatters are required to activate the Free Spins round, awarding 10, 12, or 25 spins depending on the number of icons used to trigger the feature. With a bit of luck, players can win up to 5,000x their bet during this round, while another three or more Scatters landing while the feature is active will retrigger it!

Bringing the Thrill of Horse Racing to the Reels

The rewarding REELBET respin will enable players to spin individual reels at additional cost, while this option offers the possibility to create extremely lucrative winning combinations, both in the Main Game and in the Free Spins round.

Commenting on the launch of the new game, David Reynolds Games Publisher at Microgaming, said Bookie of Odds was set to be a real front-runner, capturing all the spectacle and thrills of the horseracing season.

He added the excellent respin feature would give players a chance to increase their win potential in the game, especially during free spins where high-paying expanding symbols could provide winning opportunities for players to achieve a full reel blackout.

The game has already gone live and can be played at any Microgaming-powered online casino.