You are at: Home News iSoftBet Signs Deal With Superbet in Romania 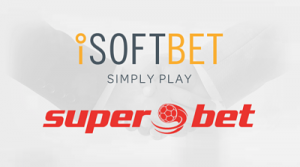 London-based online and mobile casino games provider, iSoftBet, is strengthening its market position on the Continent with the latest deal, which will provide Romanian operator Superbet with the entire company’s extensive portfolio.

Superbet players will now have the chance to enjoy in iSoftBet’s high-quality releases, including original video slot, branded content and a selection of table games.

The integration will be completed in the following weeks, after which the players will have the opportunity to access the games via the SoftSwiss platform.

Yet another debut on a regulated market further increases iSofBet’s presence. The move into Romania comes after successfully completed deals with Lithuanian Unigames and Cashino in the UK and Spain.

iSoftBet’s Head of Business Development, Michael Probert, said the company was well acquainted with the Romanian Market, since it already employed over 130 staff in Timisoara, the country’s third most populous city.

He added Timisoara was a city with a history of gambling and expressed his hope the company would achieve great things in this Eastern European country.

Probert commended Superbet as one of the key players in the market, and pointed out the fact the company already had experience in Romania. British developer first entered this market back in 2015 with Betbet.

He said the business situation was exciting, offering lots of opportunities. Probert also used this opportunity to announce an impressive batch of new HTML5 games, which were a part of the company’s offensive.

A very exciting period is in front of us, when it comes to iSoftBet, with new deals being finalized, new market opportunities and new clients.

Probert said the company expected to increase its customer network, with its multi-territory businesses becoming more and more popular. He stated the iSoftBet had increased the game development team and added some industry veterans to take its product to a whole new level.

iSoftBet is an online and mobile casino games supplier, providing its games to some of the world’s biggest operators. Certified in Italy, Spain, Belgium, Portugal, Alderney and the United Kingdom, the company is constantly expanding its operations and client list.