You are at: Home News Fu Er Dai Slot from Play’n GO Hits the Market 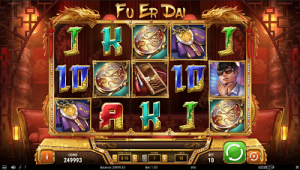 Titled Fu Er Dai, this game draws its inspiration from the Orient and brings expanding wilds, sticky wilds, re-spins, and much more thrilling features which can prove very lucrative.

Fu Er Dai is a high variance slot, which means payouts are less frequent during the main game but are definitely worth waiting for, while even more chances to grab huge winnings await during the game’s special features.

The grid is a standard one, consisting of five reels and three rows, with a total of 10 paylines. The wide betting options will suit any style of play and budget, with wagering starting at $0.10 and going all the way up to $100 per spin, while if you’re lucky enough, you may win as much as $5,000 on a single spin.

Fu Er Dai features not one, not two, but three Wild symbols.

The standard one is represented by the Wild Dragon symbol, and substitutes for all other symbols. The expanding one can appear only on the three middle reels, and it lands on the grid, it will cover the entire reel, resulting in more chances to receive payouts. The standard Wild symbol can turn into a Dragon Girl Wild, which offers a re-spin when lands, locking the Wild reel during that spin.

Two or more Wilds on the reels will activate the Win Spins feature, awarding five Win Spin. Each Wild that appears on the reels during this feature will be sticky, with each additional extra Wild awarding an additional Win Spin. This feature can give handsome rewards, especially since a total of 20 Wins Spins is available to be won.

Although there’s no progressive jackpot on offer, Fu Er Dai can reward those lucky enough with some pretty amazing cash prizes. The game is already available online, and you can find it at any of Play’n GO-powered casinos.