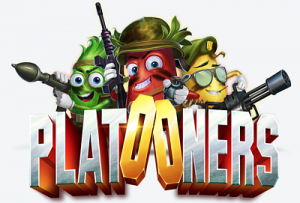 ELK Studios is one of the leading game developers, whose supreme slots are well-known for their top-notch design and great visual standards.

The company has recently added a new slot titled Platooners to its already impressive portfolio, so read on to learn more about their latest product.

This five-reel four-row slot features a total of 178 different ways to win. The game is military-themed, the action is set deep in the jungle, while the cameras roll and the reels roll down.

The Platooners are cartoonish actors in a movie which are guiding you through the slot, and helping you win big and defeat the Snakes of Fortune.

All symbols you’ll encounter while playing Platooners are inspired by the war theme, so the high-paying symbols are represented by medical bags, dog tags, binoculars, and knives, while the playing card symbols J, Q, K and A make up the low-paying ones.

The three Platooner characters randomly activate Action Spin features. Green Rockets Platooner fires grenades at reel 1 and 3, turning all the symbols on these reels into the same matching symbol. Red Grenades Platooner throws grenades on reels 3, 4, and 5, while any symbol hit by a grenade becomes the Wild.

If you manage to get 3 or more Scatters, you’ll unlock the Snakes of Fortune bonus round. This feature begins with 15 free spins, while the Platooners will take turn in attacking the snake.

The number of Platooners depends on how many bonus symbols you land while triggering the feature. While being attacked, the snake will release coins, extra weapons, ammo, or more powerful grenades.

Once the Platooners manage to kill a snake, they will be confronted by a bigger, and stronger one, offering even more goodies.

The good news for punters is that the Action Spins feature is triggered fairly regularly, with payouts worth 2,500 times your stake to be won on each spin.

You can play this thrilling new release at any of ELK Studios-powered online casinos.