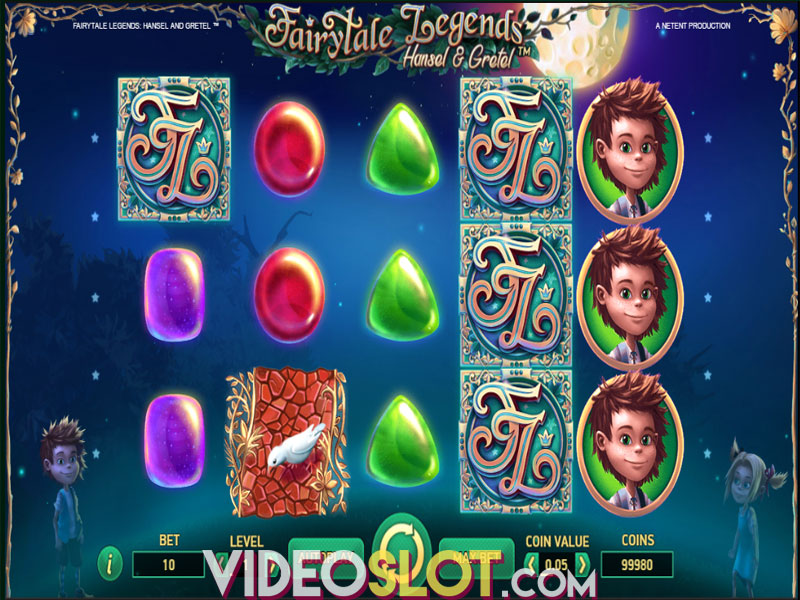 It is getting dark in the forest and the brother and sister, Hansel and Gretel got lost and now they cannot find the way back home. They are alone in the misty forest that hides all kinds of dangers, but their fairy guardian will be there to help them. This is the setting for another title in NetEnt’s series Fairytales of Legend. After the tale of Red Riding Hood, it brings back the memories of bedtime stories about lost brother and sister.

In line with the story there will be no other characters on the reels, only candy and the game logo. The Fairy will appear at random to save you from despair on a non-winning spin. Sharp graphics and the immersive soundtrack will engross you in the story, while 6 bonus games will be more than enough to keep you playing.

Once you launch the game you will see a typical NetEnt controls menu with the options to set the level of the bet, the coin value and the option to switch to Auto Play mode. You will need as little as $0.10 to start playing, but you will not be able to bet more than $200.

During the main game you can benefit from Stacked Wilds which appear on the second and the fourth reel. Should a Stacked Wild fully cover one of these reels, you will be awarded a re-spin. During the re-spin Stacked Wild can appear on reels 1 and 5 as well, which increases the possibility of getting additional re-spins.

This feature serves to warm you up for the Bonus game that brings three different options. To trigger the Bonus game you will need to land three treasure chests on reels 1, 3 and 5. The chest will open and grant you either a Candy House Feature where you have to pick three different type of candy to reveal the multipliers or 10 Free Spins, or a Coin Win worth 15 times your stake. Out of these three we see the Free Spins as the most valuable for a number of reasons. First of all there is a possibility to win extra Free Spins if you land bonus symbols. Secondly, you could also activate the Stacked Wild Re-spin feature which can lead to more free games.

Finally, if you have no luck to trigger the Bonus, the Fairy will appear and help you out with one of the three random features: The Fairy Surprise which magically transforms symbols to grant you a winning combination; Fairy Wonder Spin brings an overlay of up to 9 logo icons for the next spin; and Fairy Wild Spin which can fill two reels with Stacked Wilds. This could return your stake 400 times.

Fairytale Legends series is particularly interesting because of the Fairy character which always adds three random bonuses with her magic wand. In addition to three bonus games available, it can satisfy even the most demanding of players.