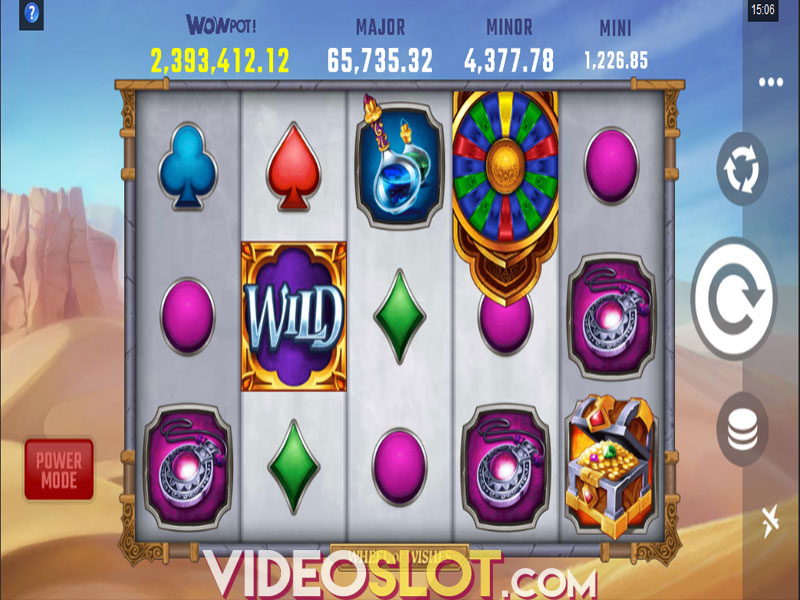 About Wheel of Wishes Slot
Rating:

Microgaming and its partners at Alchemy Gaming started 2020 with the launch of the new Wheel of Wishes slot, a really interesting addition to the renowned developer’s offering. Boasting a well-executed Middle Eastern theme, together with hidden riches and magical lamps, the game has a rewarding progressive jackpot on offer, starting at $2 million! Apart from the progressive prizes, this 5-reel release doesn’t offer such staggering awards, with the biggest one worth only 500x the bet. The action starts at as low as $0.10, with such exciting features as Wilds, Scatters, Power Spins, Bonus Wheel and the Free Spins round helping punters grab cash prizes.

Set in a vast Arabian desert, Wheel of Wishes boasts nice visuals, while its cartoonish symbols looking beautiful. At least 3 matching symbols are needed on a payline to start receiving payouts. The game’s reel set is a standard one, consisting of five reels and three rows, while players will have 10 active lines to play on. When it comes to betting options, players can place a stake as low as $0.10, while the maximum one will not be able to exceed $25 per spin. The most appealing part of this slot is the WowPot progressive jackpot, part of the industry’s largest jackpot network. It starts at $2 million, meaning it’s quite capable of changing the lucky winner’s life.

When it comes to the visuals, the Microgaming release is an attractive one. Taking players to Arabian sands, with a superb soundtrack playing in the background, the game features such symbols as low-paying Royals and amulets, potion bottles, treasure chests and spellbooks. The golden magic lamp is the highest-paying symbol, with 5 of a kind on a paylines resulting in a payout worth 10 times the stake. There’s also the Wild symbol, which can also appear stacked on the reels, additionally helping players on their journey to find riches. The game also features the Scatter symbol, responsible for triggering the bonus round.

The game logo serves as Wild, replacing other symbols on the reel, though it won’t be able to substitute for Scatter. Thanks to Wilds, players will be able to form additional winning combinations and increase the size of their winnings.

Landing 2 or more Scatter will trigger the Power Spins round. This can also be done by paying a fee of 10 times your stake. Once the Bonus round starts, huge 3x3 symbols will make their appearance on the reel 3. But it’s the Bonus Wheel you’ll want to see on the grid, as it’s your way to the game’s main prize. The Wheel of Wishes Jackpot bonus round will decide whether you’ll receive a smaller payout, or you’ll get the coveted WowPot progressive jackpot!

Wheel of Wishes is an exciting addition to Microgaming’s offering, with its progressive jackpot being the most appealing part of the game. Its average Return to Player may be low at 93.34%, but it’s quite common for a progressive game. It’s all about triggering the Wheel of Wishes feature and claiming one of the progressive prizes on offer, as the biggest payout in the main game is worth “only” 500x your wager.