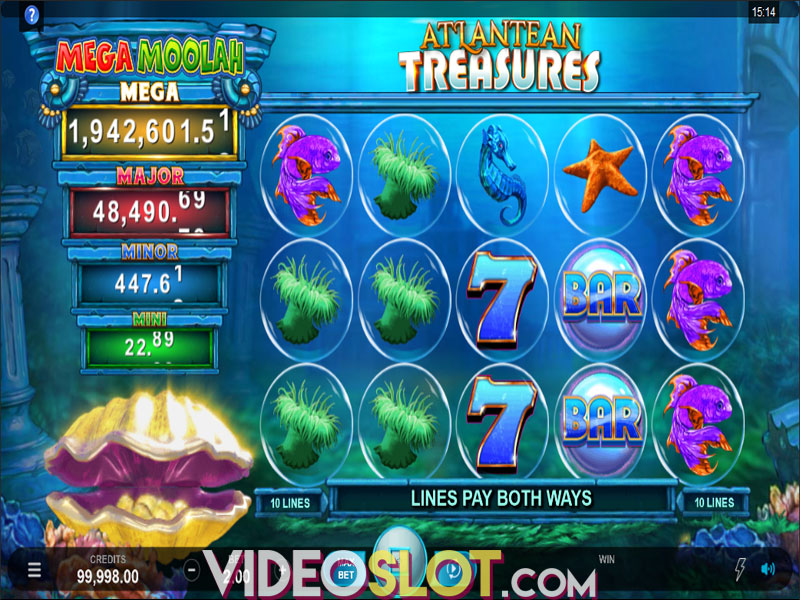 Mega Moolah is a well-known name in the online gaming industry and has become a synonym for staggering progressive prizes often reaching seven or eight-figure sums. That’s why another new installment in the popular series, titled Atlantean Treasures, is sure to draw players’ attention. This 5-reel release will take punters to an underwater adventure, and although payouts in the main game only go up to 500x the stake, the progressive jackpots are there to spice things up. Expanding Wild and a respins round are the only features on offer, but that’s enough for a game bearing the Mega Moolah name.

As its name suggests, the game will take to an epic adventure set in the sunken city of Atlantis, with various sea creatures populating its reels. Set deep beneath the ocean's surface, the game’s reel set features a standard 5x3 layout, along with a total of 10 active lines to play on. Once the reels start spinning, you’ll need at least 3 matching symbol to start receiving payouts. The action starts as low as $0.10, while the maximum bet you can place is set at $200 per spin. Atlantean Treasures is a medium variance title, with a rather disappointing RTP in the main game – 92.08% - as it doesn’t include the slot’s progressive jackpot prize.

The game itself doesn’t boast revolutionary visuals, as the focus is on its prizes. It still looks nice, though, with classic symbols, such as sevens and bars, as well as fish, starfish, seaweed and seahorses populating the reels. It certainly stands out when compared to other Mega Moolah games out there. The list of symbols also includes a mermaid icon, serving as the Wild. It will appear only on the game’s three middle reels, replacing all other symbols – bar Scatter – and helping form additional winning combinations. Scatter will also be appearing on the reels 2, 3, and 4, to help punters claim one of the progressive jackpots on offer.

Whenever Wilds appear on the three middle reels, they will activate the Expanding Wilds feature, allowing players to make an entire reel Wild. Additional Wilds can retrigger this feature, with all of the expanded symbols (or reels) remaining locked!

The Progressive Wheel feature is your way to winning one of the available progressive prizes. All you need are 3 Scatters to appear over any of the game symbols on reels 2, 3, and 4 (Wilds are not included). This is your ticket to entering the jackpot feature! Doing so guarantees a win. There are four jackpots: Mini, Minor, Major and Mega. The more lucrative one of the first three is the Major Jackpot, which starts at $10,000. But it’s the Mega Jackpot that has the power to change players’ lives, since it starts at a staggering $1 million!

Mega Moolah is a household name for slot fans, due to the size of the prizes it brings. When it comes to this release, players can look forward to neat main game features, though the RTP of just 92.08% can hardly lead to any handsome payouts. However, things change for the better once the Progressive Wheel feature is activated, as one of four progressive jackpots can be yours – hopefully, the Mega Jackpot, which starts at $1 million!