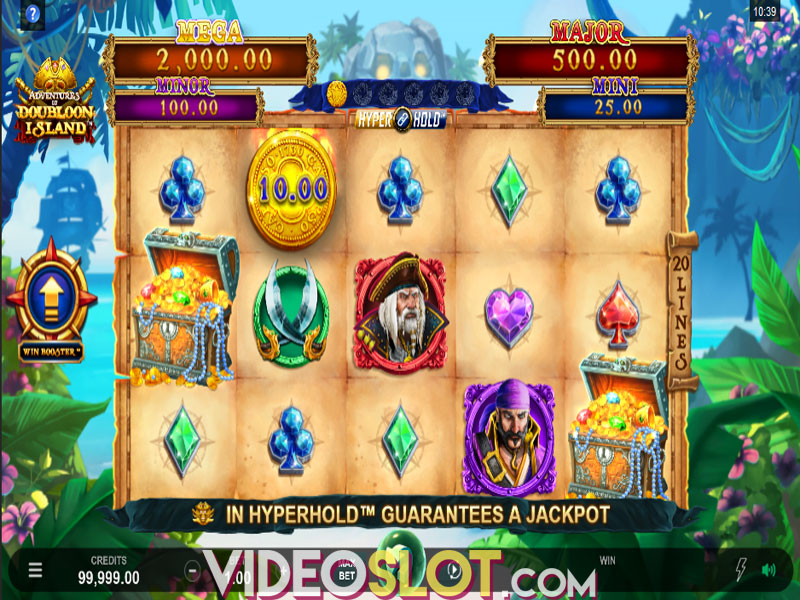 Another pirate-themed video slot is heading our way, this time straight from Microgaming’s and Triple Edge Studios’ creative kitchens. Gather your crews, gather supplies for your ships, and embark on a quest for the Skull Island, also known as Doubloon Island, due to the fact that vast treasures are hidden there. Adventures of Doubloon Island is packed with additional features, including expanding Wilds, the Free Spins feature, the HyperHold, and four fixed jackpots, as well as the Hyper Booster option. Win up to 3,333x bet in this highly volatile game.

Adventures of Doubloon Island is a five-reel, three-row video slot that benefits from 20 fixed paylines. So, it is a quite usual reel formation, followed by common rules of the game. The Microgaming product pays left to right, starting from the leftmost reel. Three of a kind is the minimum for landing payouts. Players can bet from $0.50 to $50 per single spin. Activate the Win Booster, and the four fixed jackpots will get bigger, but it also increases the wager, up to $75.

Even though the map of the hidden treasure was carefully hidden, people talk, especially after a glass of rum. So, we did manage to find out that two Captains have already gone on a quest for the hidden treasures. Follow them, and you will discover the location of the gold. The Red Captain and the Violet Captain are leading the group of high-paying symbols, followed by the Parrot and Swords. Card suits act as low-paying icons. The Treasure Chest is the Scatter that triggers free spins, while the Female Captain acts as a Wild. Doubloons and Skull Doubloons trigger the HyperHold feature.

The Female Captain Wild has the ability to expand and cover an entire reel, if there is a possibility to form a winning combination. As for the Free Spins feature, it is triggered when three or more Treasure Chest Scatters are landed on the reels. Gamers can trigger 10, 15, or 20 free spins by landing 3, 4, or 5 Scatters. The best part of the story is that all low-paying symbols are removed from the reel grid.

Pirate-themed video slots are quite common in the iGaming industry, and every new game with a similar topic really has to offer plenty in order to stand out from the crowd. Fortunately for Microgaming and Triple Edge Studios, Adventures of Doubloon Island definitely has what it takes to attract plenty of seamen among gamers. Our personal favourite is the HyperHold feature, where you can battle for four fixed jackpots, and win the Mega Jackpot of 2,000x bet.