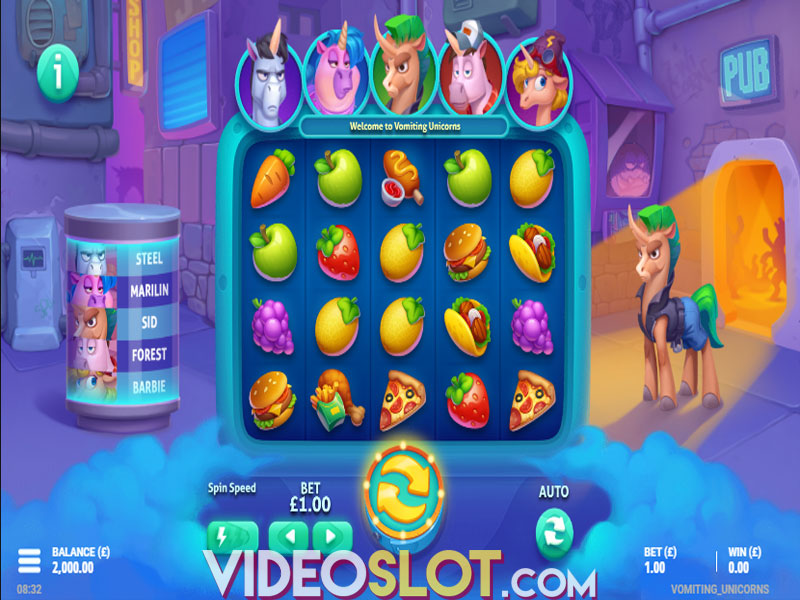 In September 2019 Gluck Games software provider released quite a unique online slot named Vomiting Unicorns. If one was to judge by the title, not many would hurdle to try this game out. However, a closer look at it presents a game with a modern design, superb, cartoon-like visuals and an upbeat soundtrack, as well as a host of features there to provide hefty prizes. Gamblers can win up to 10,000x the bet with the help of Wild Substitutions, a Vomiting Unicorns Round, a Wish Bonus and a Jackpot Spin Feature. The game has a 95.7% RTP.

Vomiting Unicorns is a 5-reel, 4-row slot offering 30 fixed paylines, across which players can wager between $0.10 and up to $15.00. Once the game loads, all you need to do is press the “left” or “right” arrow in order to decrease or increase the bet size. Three matching symbols appearing on adjacent payline positions, from left to right, issue payouts. Set the reels in motion by pressing Spin or Maxbet which implements the highest bet available. Activate Autoplay if you want the game to continue without your interference.

Symbols that appear most frequently on the grid are those with lower payouts ranging from 1x to 2x the bet when 5 hit. They are depicted with fruit: a Carrot, an Orange, a Strawberry, Grapes and an Apple. A Corn-dog, Tacos, Chicken and Fries, Pizza and a Hamburger appear on the upper part of the Paytable to bring more significant prizes spanning between 2.5x and 33.33x your stake for 5 of a kind. Wild, depicted with a Spaghetti take-out takes the place of any other symbol when forming win combinations.

At the beginning of each spin, one to five Unicorns which are situated above the reels, makes a Wish represented in a bubble near their head. Should the Wish match at least one symbol on the reel, the Unicorn will vomit turning that entire reel into an Expanding Wild. A light will also appear above the Unicorn’s head, and if all lights become lit on the same spin, then the Jackpot Spin Feature is triggered. Pay close attention once the light start dancing, as you will be randomly rewarded with a win Multiplier spanning from 250x and up to a stunning 10,000x the bet. Such huge prizes can definitely bring a smile on your face.

Vomiting Unicorns is a video slot that strives to deliver a profitable and fun playing experience via its unusual topic, colorful design and lucrative features. Play it from the comfort of your home, on a desktop computer, or when you’re on the move, on any portable device.