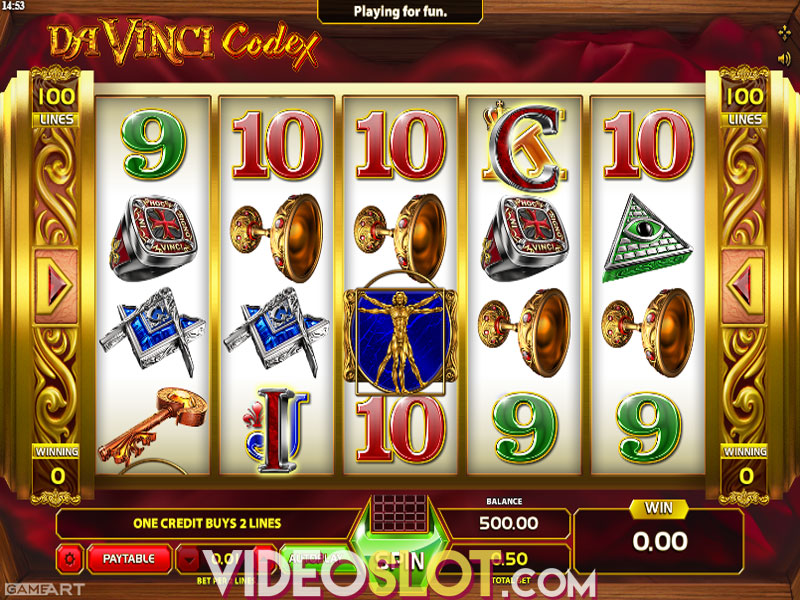 A GameArt edition from August 2015 named Da Vinci Codex draws inspiration from the prolific life of the famous artist and scientist Leonardo Da Vinci. You can expect an intense gameplay, with possibilities to win huge prizes. This game fuses together an intricate design and a mysterious soundtrack, alongside satisfying payouts and an interesting topic. You can benefit from Wild Substitutions, Scatter Pays and a Free Spins Feature.

Da Vinci Codex is a 5-reel, 4-row slot in which you can wager between $0.50 and $25.00 across 100 fixed paylines. To adjust total bet values you must set the bet per two lines which goes from $0.01 to $0.50. As soon as a minimum of 3 identical symbols lands on adjacent payline positions, starting from the leftmost reel to right, payouts will be issued. Press Spin to start and stop the reels or initiate Autoplay with up to 500 automatic rounds so that the game continues without interruption.

The reels are crammed with symbols that are mostly theme related. High-value symbols are Mona Lisa, a Key and a Chalice with payouts 20x, 15x and 10x the bet respectively for 5 of a kind. Other high-win icons include an Illuminati logo, a Ring and Compass awarding 5x, 4x and 3x the wager correspondingly when 5 are on a payline. Nine through Ace playing card symbols represent low-paying icons that deliver 2x the wager each if 5 matching appear on a winline. Wild is represented with a Red Seal that grants prizes of 10x, 20x and 40x the stake when 3, 4 or 5 land. Unfortunately, Wild appears during the Bonus only to replace all other icons but Scatter. The Vitruvian man stands for Scatter that will reward you with payouts from 2x to a staggering 200x the bet whenever between 3 and 5 hit the grid.

Entrance to the Free Spins Round is granted when letters VINCI appear in such an order on the layout. 6 free spins commence and the before mentioned letters transform into Wilds to substitute other symbols in completing wins. Enabling the Gamble Feature allows you to stake your winnings up to 5 times in efforts to double them.

Though there are many things we liked about this video slot, we certainly missed Wild during base game, and disliked the small number of freebies awarded. However, it’s a thoroughly enjoyable game, so give it a shot any time you like and anywhere you choose, as it’s available for play on all devices, desktop, mobile and tablet.