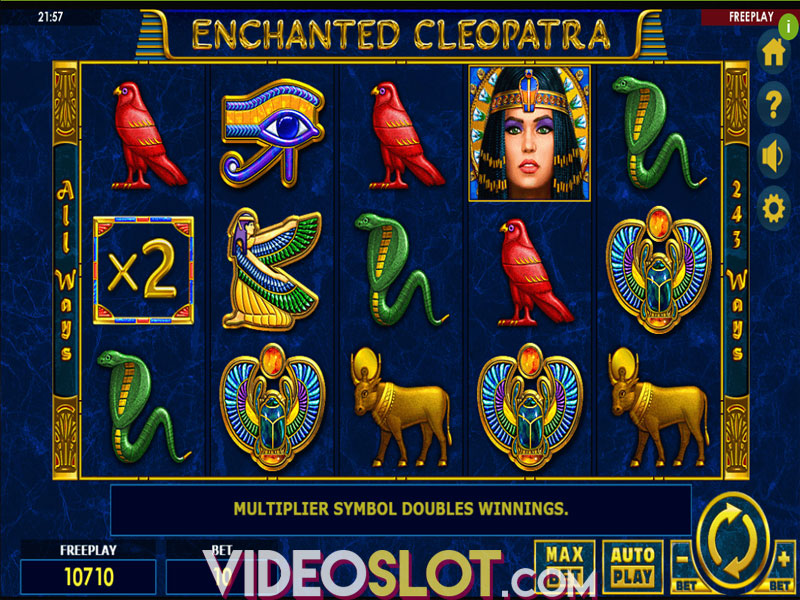 The story of Cleopatra is well known to many people, taught in history books and depicted in many movies. A charismatic woman who could speak multiple languages, she took the Egyptian throne alongside her brother, eventually ousting him and taking full control. Said to be one of the most beautiful women of her time, it is no surprise Amatic decided to give this pharaoh a slot of her own. Awesome graphics, fun gameplay and some awesome special features – all of these elements come together to lure you in. By the time they promise you a jackpot win worth 3000x your stake, it is already too late to resist!

Enchanted Cleopatra is a 5-reel, 3-row game with 243 ways to win, forgoing traditional paylines. Players can set their wagers between $0.01 up to $300 per spin. Pressing the spin button will make the reels move, revealing a new set of icons each spin. The developers also included an Autoplay button, so you do not have to keep spinning manually. Simply press the button, and watch the magic happen. But make sure you press it again to turn it off, because it will keep going until you have no funds left.

We quite like the symbols in this title, as the artists took their time to make each one unique, so you can say goodbye to playing card royals or card deck suites. Instead, you will find statues of several animals: a green snake, a red bird, a blue cat, and a brown-gold ox. There are also flowers, an ankh, the Eye of Horus, a hieroglyph of the goddess Isis, a richly decorated scarab, and Cleopatra herself. Cleopatra is a Scatter, used to trigger free spins.

Three, four or five Cleopatra Scatters reward a cash prize and 7, 10 or 15 free spins respectively. During these free turns, all symbols grant their pays as if they were Scatters – from any position, regardless whether they are adjacent to each other or not. It is possible to win more free spins by getting additional Cleopatra icons while free spins are already active.

The multiplier symbol can only appear on the first, second and third reel. That means the largest win can be multiplied by several icons at once for a maximum 6x multiplier. This multiplier can be applied to any winning combination, both during normal gameplay or during free spins.

Enchanted Cleopatra is a medium-high volatility slot with an unknown RTP. We were incredibly impressed by the special features, as Scatter pays for all icons and a 6x multiplier combined can make for some insanely lucrative wins. That said, without knowing the house edge, we cannot recommend the game to our readers, as your odds of winning anything worthwhile could be abysmal.