You are at: Home 2by2 Gaming Golden Tides
back to all games
Golden Tides Slots Game
Game Details 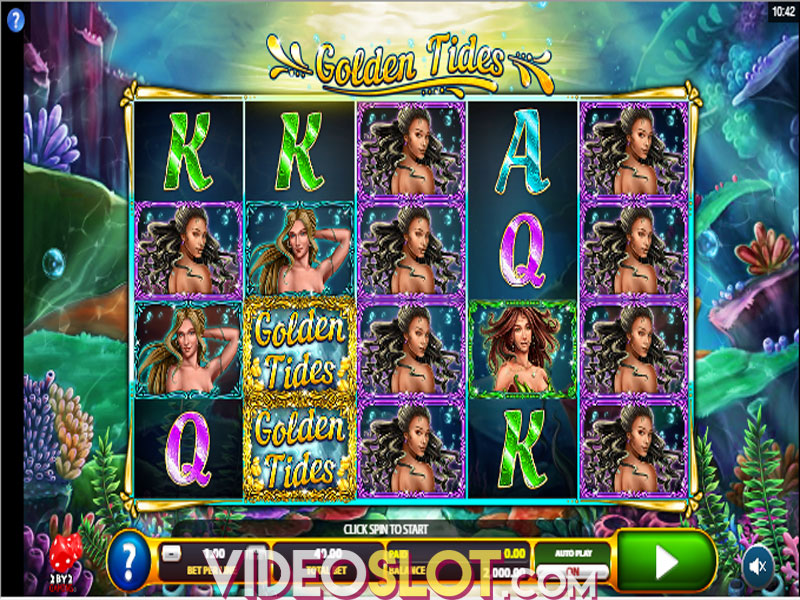 Golden Tides is an aquatic fantasy video slot rolled out in August 2019 by 2by2 Gaming, an American software developer. With a calming audio, top-notch graphics and splendid animations, alongside profitable features such as Wild Substitutions, quite a few Base Game Features and Free Spins, this slot offers an enjoyable playing experience. The RTP of 96.04% is the industry’s average.

The 5-reel, 4-row layout placed deep under water is configured to 40 paylines across which you can wager between $0.40 and $1.00. Adjusting line bet values on a scale between $0.01 and $40.00 will set your wagering preferences. To start the game, use the Spin button or enable Autoplay. Symbols deliver payouts when matching ones appear on consecutive payline positions, beginning with the leftmost reel.

High-paying symbols are 4 breath-taking Mermaids delivering between 3.45x and 10x the stake for 5 of a kind. Two Shells are medium-win icons awarding 2.5 and 3x your bet when 5 are on a payline. Low-value icons are depicted with playing card Royals, paying out 1x the wager each if 5 hit a winline. The game’s logo represents Wild appearing on the 2nd and 4th reel, capable to replace all symbols except Scatter, and award prizes of 10x and 30x the bet when 5 land on the reels during regular and gold pays respectively. A Treasure Chest stands for Scatter delivering 1x, 5x and 10x your wager correspondingly when 3, 4 or 5 appear.

During main game, a Mystery Feature can be activated randomly. Every reel has a stack of mystery positions that are replaced with one icon to provide chances of bigger prizes. Every time a stack of Wilds appears on the 2nd or 4th reel, the Golden Mermaid Round starts turning Mermaids into gold ones to award 30x the bet. 3, 4 or 5 Scatters landing anywhere on the reels initiates the Free Spins Round with 10, 15 and 20 freebies respectively. Three or more Scatters appearing during this feature grants additional spins. Before the Bonus starts you can choose one of the two available options: the Golden Mermaid or the Frequent Feature Free Spins. In the Golden Mermaid Feature, Mermaids appear on every spin and deliver prizes according to the Golden Paytable. Should you opt for the Frequent Feature spins, the Wild Mermaid and the Golden Mermaid Features are triggered more frequently.

Though it seems like the game has scores of opportunities to get hands on prizes, the base game isn’t that rewarding and the features don’t get triggered as often as needed to grant those really important payouts. However, there’s no reason not to try it out at home, on your desktop or on mobile or tablet.