You are at: Home 2by2 Gaming Fiery Kirin
back to all games
Fiery Kirin Slots Game
Game Details 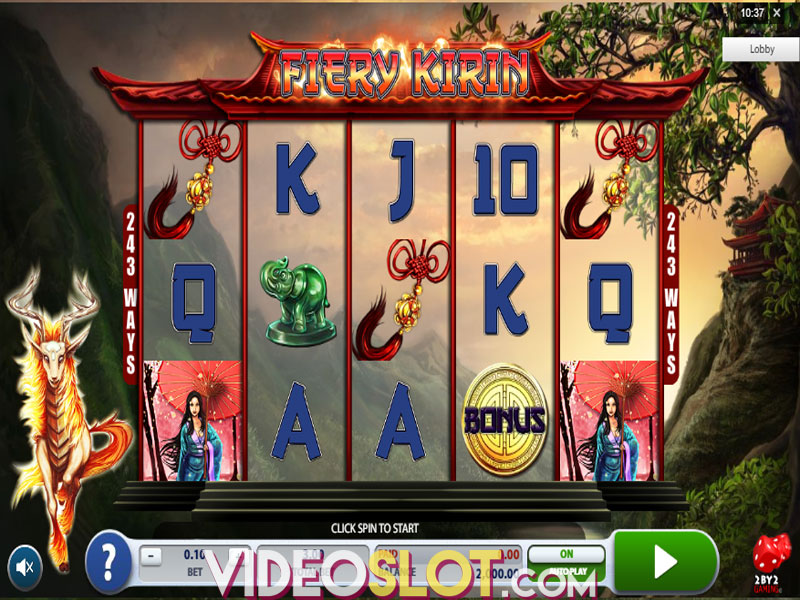 Released by 2by2 Gaming in June 2019, Fiery Kirin is a Japanese-themed online slot that derives inspiration from the rich Asian culture, presenting a mythological creature, Kirin which strives to provide a rewarding playing experience. The game is done with excellent visuals and a relaxing Oriental audio. You can expect 4 base game features and a Free Spins Feature, as well as a RTP of 96.03%.

A 5-reel, 3-row layout is configured to 243 ways to win. With no traditional paylines whenever symbols land in succession from left to right they will award payouts. Set bet values ranging from $0.30 to $30.00 and press Spin to start the game. Enabling Autoplay will have the reels spinning up to 100 times without interruption.

A Geisha and a Pagoda represent the game’s top paying symbols which issue 33.33x and 16.66x your stake if 5 are in a row. A Mountain Top, Jade figurine and a Necklace award 6.6x and 10x your wager when 5 appear. 10 through Ace playing card symbols stand for low-value icons that deliver from 1.66x to 5x the stake for 5 of a kind. A blazing Wild substitutes for all other symbols except Scatter. A golden Coin depicts Scatter landing only on the 2nd, 3rd and 4th reel to award payouts of 30x the bet whenever 3 appear.

The main game stores 4 different Features, awarded randomly at the end of any spin. Wild landing on the 3rd reel causes reels 2, 3 and 4 to expand thus increasing the number of ways to win to 576. Additionally, reel 3 becomes entirely Wild offering more chances for wins. The magical Kirin running across the grid could drop Wilds to help form win combos. Furthermore, a Respin can be granted to bring a winning spin or Free Spins could start. Obtaining 3 Scatters triggers the Free Spins Game where players are given to choose among three versions of this Bonus. In one of them, an expanding Wild reel is guaranteed, while in the other you get 8 freebies during which one reel turns Wild and becomes 4 rows high. In the third version players receive 10 spins and the expanding Wild on reel 3 hits more often to double the wins it takes part in. Finally, players are rewarded with a Golden Turtle for every Free Spins Game, and collecting 3 allows them to pick a Bonus.

Though the Bonuses look promising, the game’s top payout is capped at merely 64,400 coins, which is not really a life-changing sum. However, the gameplay is exciting and interesting, so if you decide to try this slot, you can play it on any device of your choosing, mobile, tablet, laptop or desktop.