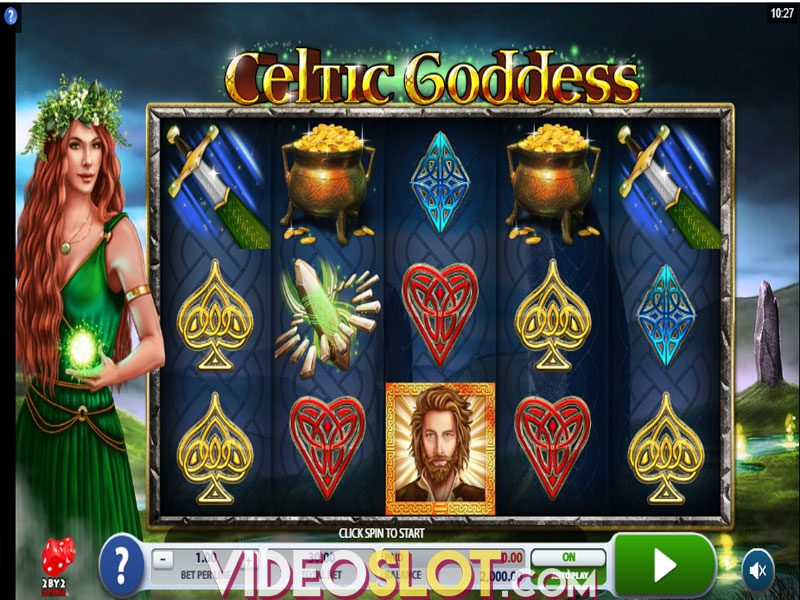 An Irish-themed video slot titled Celtic Goddess was released in August 2018 by an American content developer, 2by2 Gaming. The slot has an air of magic to it, achieved with a melodious soundtrack and a cinematic design, with symbols and features related to the topic. Take advantage from Multiplier Wilds, Symbol Upgrades and a Free Spins feature in this game that has a RTP of 96.03%.

The 5x3 layout is set in Ireland’s fogy moors, offering 30 paylines to wager on. The bet configuration goes as low as $0.30 and up to $30.00 per spin with the possibility to adjust the line bet on a scale from $0.01 to $1.00. To get the reels going click on the Spin button and when symbols land on adjacent payline positions from left to right you will receive payouts. The game can be played automatically if you initiate Autoplay.

A Man and a Woman are high-value symbols delivering 16.66x and 10x the bet respectively for 5 of a kind. Other high-value icons include a Pot with gold, a Magic stone, a Sword and a Spear awarding between 3.33x and 8.33x your stake if 5 hit a winline. Playing card suits issue lower payouts of 1.66x the wager for 5 of kind. The Goddess herself stands for Wild able to replace all other icons but Scatter. Though it only appears on reels 2 and 4, Wild will increase your win by 2x if one is part of a win and should 2 Wilds complete your win, the prize will receive a 4x multiplier. A Magical stone represents Scatter appearing in any position to award 1x, 2x and 10x the stake when 3, 4 or 5 land.

Landing at least 3 Scatters will also activate the Free Spins Game with 8, 12 or 16 freebies correspondingly. Though this Bonus cannot be re-triggered, the Goddess Feature is active after every spin. As far as this feature goes, it is also triggered randomly during base game. Any low-value symbols can be chosen to be replaced with one high-win icon, thus significantly increasing your chances of obtaining higher prizes.

Optimized for play in landscape and portrait mode on smartphones and tablets retaining the high-quality design of the desktop version, Celtic Goddess can be played at home or on the go.